Prime Minister, the Most Hon. Andrew Holness, presents Head of the Department of Anesthesia and Intensive Care at Bustamante Hospital for Children, Dr. Brian James, with his award during the Jamaica Civil Service long-service awards ceremony, held on the lawns of King’s House on Wednesday (November 20). 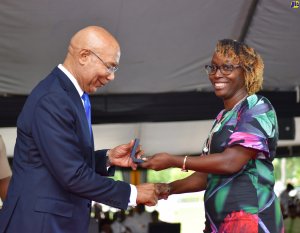 Governor-General, His Excellency the Most Hon. Sir Patrick Allen, presenting an award to Golda Clarke of the Auditor General’s Department, during the Jamaica Civil Service long-service awards ceremony, held on the lawns of King’s House on November 20.

It was with an overwhelming sense of pride and joy that Dr. Brian James accepted the Jamaica Civil Service long-service award on Wednesday (November 20), for his years of contribution to the country in the medical field.

He was among 430 civil servants who have served for 25 years or more, who were recognised at the awards ceremony held on the lawns of King’s House.

Dr. James, who is head of the Department of Anesthesia and Intensive Care at the Bustamante Hospital for Children, told JIS News that, initially, when he learnt that he would be among the honourees, he did not think much about it.

He noted, however, that as Prime Minister, the Most Hon. Andrew Holness, presented him with his medal, he was overcome with pride.

He said he has received many awards during his lifetime, but none has given him this feeling of satisfaction and sense of achievement.

“It feels like I have achieved one of my most treasured accomplishments,” he told JIS News.

“I didn’t know it would have meant so much to me. I have served in the public health sector for a long time and I am still happy to do my job,” he added. 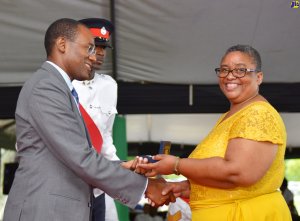 Minister of Finance and the Public Service, Dr. the Hon. Nigel Clarke, presents Morcia Grindley of the Ministry of Local Government and Community Development with her award, during the Jamaica Civil Service long-service awards ceremony, held on the lawns of King’s House on Wednesday (November 20).

Dr. James has worked a total of 26 years in the public health sector, including at the Kingston Public and Spanish Town hospitals.

He told JIS News that he plans to wear his medal to work for the next seven days.

“I can’t wait to wear it to work tomorrow,” he laughs, adding that he plans to have his name engraved on the medal.

Like Dr. James, the other award recipients, who spoke with the JIS News, were delighted to be honoured.

Visually impaired telephone operator at the Ministry of Industry, Commerce, Agriculture and Fisheries, Jacqueline Reid, who has been employed to the Ministry for 26 years, said she was “very happy” to be recognised.

“I feel very good, especially because this is my first award,” the University of the West Indies (UWI) graduate tells JIS News, adding that she enjoys working in the Government service.

Calvin Thompson, who was also recognised for 26 years of service to the Ministry of Industry, Commerce, Agriculture and Fisheries, said it was good to have received an award before he retires. 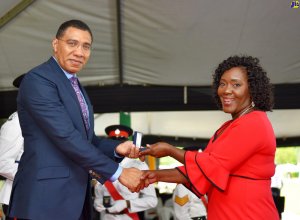 Prime Minister, the Most Hon. Andrew Holness, presenting an award to Cherry Chambers of the South East Regional Health Authority, during the Jamaica Civil Service long-service awards ceremony, held on the lawns of King’s House on Wednesday (November 20).

Mr. Thompson started working in the Ministry as a statistician and is now the Director of Field Operations.

“I will put it (award) up on my wall so my children can see it and feel proud and even aspire for something greater,” he told JIS News.

Minister of Finance and the Public Service, Dr. the Hon. Nigel Clarke, in his remarks, congratulated and thanked the honourees for their sterling and dedicated service over the years.

He pointed out that the civil service is integral to the operation of the country.

“Jamaica’s objectives of growth and development, prosperity and fulfilment of the dreams of our ancestors can only be achieved with an efficient and productive civil service, constituted of capable men and women, who bring to their job, duty, service and sacrifice.

“Having a long-service award such as this recognises your contribution to our country. By valuing that contribution, we are promoting the values and the tenets that are required for us to continue to build a successful state,” he added.