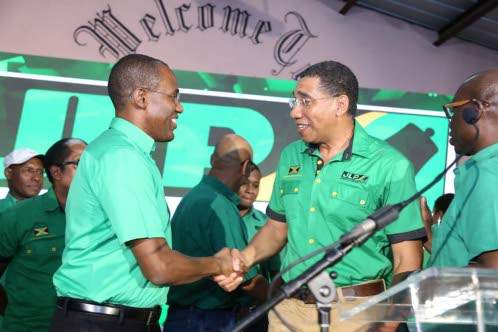 Dr. Nigel Clarke wins North West St. Andrew seat. Retaining the seat handsomely for the Jamaica Labour Party (JLP).  Former MP Derrick Smith who retired due to ill health, causing a vacancy to exist.  The People’s National Party had no chance of beating the JLP based on voting patterns over the years. Of the entire boxes of 112 for Dr. Nigel Clarke 4448 and Keisha Hayle 2812 votes.

This preliminary count of the 112 boxes counted in NW St. Andrew … the voters cast 4448 votes for Dr. Nigel Clarke of the ruling JLP.   The voters in turn casted 2812 votes for Keisha Hayle of the PNP, both first time entrants selected to enter politics.  Dr. Nigel Clarke is already a Senator.  This senate seat is an appointment by the Prime Minister. He will now be in the lower House as a MP.

In 2016 the JLP won by 60 percent of the votes.  This time it is 24 percent. By-election voter turn out in Jamaica rarely ever exceed 25 percent.  The last by-election in St. Mary won by Dr. Norman Dunn, JLP had a turn out of over 40 percent.  This was a most unusual development.

In the Norman Gardens Division,  St. Andrew SW Jacqueline Lewis PNP got 2062 votes to the JLP’S 124 votes … a turn out of a mere 16 percent.

Elections Director Orrett Fisher has confirmed this voter turn out as stated above.

“If the people give me the mandate I will serve … even if I do not win” declared a bubbly Keisha Hayle.  She was careful to save her best face for the cameras. Deep down you could sense her disappointment.

Minister Daryl Vaz,  MP, said “The PNP vote is flat.  The JLP has not increased its vote over 2016.  We have work to do and to communicate more with the people.  This is significant as this is a mid term assessment of our performance.”

We congratulate the JLP’s Dr. Nigel Clarke on his victory today Monday, March 5, 2018.