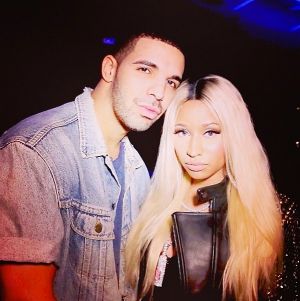 Drake may be building up his OVO imprint but he is still loyal to YMCMB. To prove that there is no beef with the crew that helped put him on the map, the Toronto rapper brought out Nicki Minajand Cash Money CEO Brian “Birdman” Williams during his Would You Like a Tour? stop at the Los Angeles Staples Center Monday (Nov. 25) night.

Preceded by show openers Party Next Door, Future and Miguel, Drizzy confessed to “counting down the days” until the tour made it back to the City of Angels, which he called his “second home.”

The 27-year-old Canadian transplant projected an unbreakable confidence in front of the L.A. crowd, inadvertently using the tour as both a visual and sonic manifestation of all that he’s achieved over the last three years. He rose from the center of a circular stage apparatus, specifically requested that an older woman join him on stage for a mini-serenade, doted over Jhené Aiko during their “From Time” collaboration, and never lost stamina energetically running through cuts like “Headlines,” “Successful,” “No New Friends,” Wu-Tang Forever,” “Come Thru,” “Worst Behavior” and more.

Birdman — whom Drizzy called “one of the most powerful figures in music” — joined the set to perform the Big Tymer’s “Still Fly” (no Mannie Fresh in sight), while Minaj popped up (literally, she rose from the middle of the stage, too) for “Proud of You.”

Uncle Snoop was the last of the night’s special guests. “This guy right here is one of the most important people, not only in music, but just in the world,” Drake said. “One of the best people I’ve ever met in my life.”

Then ended the night on a reflective note, with a performance of “Started From the Bottom.”

Drake’s next Would You Like a Tour? stop will be Vancouver, Canada, on Thursday (Nov. 28).

For the original report go to http://www.bet.com/news/music/2013/11/26/drake-brings-out-ymcmb-family.html