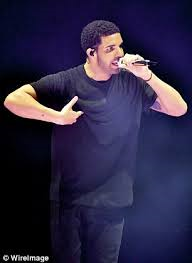 Each year the roster of unannounced guests tends to outshine the headlining names known in advance.

Drake closed off his fifth annual OVO Fest by trying to encourage the reigning NBA MVP to bringing his talents to Toronto.

Kevin Durant was just another 6 foot 9 240-pound member of the crowd at the Molson Amphitheatre on Toronto’s waterfront.

As Drake worked the crowd, he got them to chant for the 25-year-old Oklahoma Thunder megastar forward to consider a move.