Mr. Vegas Concerned About The Number Of Men Now Killing Their Spouses, As He Promotes New Song, “Can’t Go Without”

After the glowing tributes from friends and persons likely perceived as foes who somehow appeared all united in praising the former PM Edward Phillip George Seaga, Jamaica’s 5th PM who was laid to rest after an extended period of displaying his coffin and opening books of condolence across the island. Mr. Seaga was seen a divisive figure by many of his political rivals. Others praised him as a visionary and distinguished statesman.
PM Holness was among his strong supporters 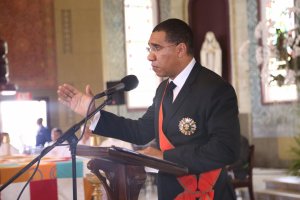 Coffin Lowered
With the coffin lowered the way is now clear to complete the burial of Mr. Edward Phillip George Seaga.  In accordance with our burial laws the vault has to be properly sealed and the requisite burial order signed by the the officiating clergy on location.  An official death certificate is then issued by the Registrar of Births and Deaths. This aspect of the operation can be emotional for most family members and close friends can be seen shedding tears. This is the final good bye.
Period Of Mourning
There was a four day period declared as an Official Period of Mourning.  This was from June 19-22.  At the formal stage of the State funeral held at the Cathedral of the Most Holy Trinity those who were asked to speak appeared to be united in praising the former PM Edward Phillip George Seaga, Jamaica’s 5th PM who was laid to rest after an extended period of displaying his coffin across the island. The artificial green carpet can be seen being removed to allow for the sealing of the vault containing the remains of Mr. Edward Phillip George Seaga at the National Heroes Park on June 23, 2019.

Hopeton O’Connor-Dennie witnessed it all and filed this story for Vision Newspaper Canada.