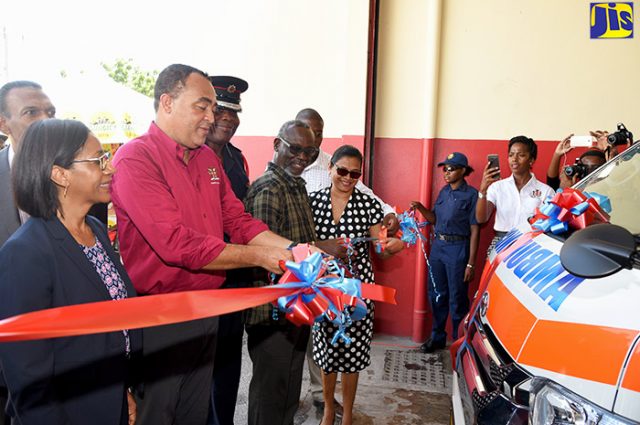 An Emergency Medical Service (EMS) has been set up at the Portmore Fire Station in St. Catherine.

This emergency medical service site will respond to road crashes along some of the major highways that meet in this area.

A ceremony to officially launch the programme was held on Friday (September 15) at the Portmore Fire Station in Waterford, St. Catherine.

The EMS, will have the use of two ambulances that were acquired at a cost of $17.2 million through funding from the National Health Fund (NHF) and the Culture, Health, Arts, Sports, Education (CHASE) Fund.

It will be staffed by members of the Jamaica Fire Brigade, who received special training at the University of the West Indies Mona Faculty of Medicine.

In his remarks, Minister of Local Government and Community Development, Hon. Desmond McKenzie said the opening of the facility is another example of cooperation between agencies of Government.

He further highlighted that the partnership between the Ministry of Health and Local Government is bearing fruit and has resulted in an increase in availability of more bed space in public hospitals and an improvement in infirmaries.

“We know that there are many Jamaicans who have been parked in our public hospitals. Since we have started the drive ….we have been able to reduce that number. This is a relationship that we want to expand,” he said.

For his part, Minister of Health Dr. the Hon. Christopher Tufton urged the citizens of Portmore to treat the service judiciously and with respect, making only genuine emergency calls.

“Try and solve some of those [simple] issues where you can. Let’s use the service for what it was intended… for emergencies,” the Minister stated.

An Emergency Medical Services is also known as an ambulance service or paramedic service. It provides out-of-hospital medical care; transport to healthcare facilities and other medical transport to patients.