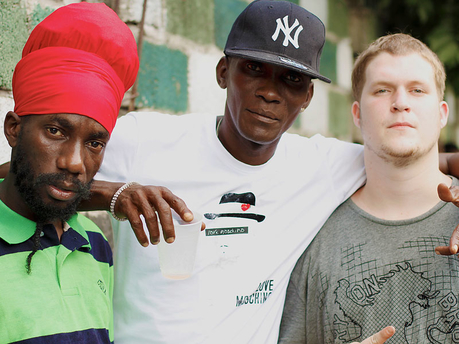 The dancehall fraternity has been left reeling after the shooting death of popular producer Patrick ‘Roach’ Samuels yesterday.

A police officer on the crime scene confirmed to The Gleaner that the producer was at the gas station at Mary Brown’s corner at 4:15 yesterday morning when gunmen opened fire on his vehicle.

Roach attempted to drive away, but more shots were fired at him. He later crashed along a section of Mannings Hill Road.

Roach was formerly Vybz Kartel’s manager and also made headlines in 2011 when he teamed up with Justus Arison for the popular rhythms ‘Overproof’ and ‘Overtime’.

A year earlier, Roach made headlines for his work on the ‘Siren’ rhythm, which featured Sean Paul’s international hit, Break Out, as well as Kartel’s Emergency.

Within minutes of hearing the news, several dancehall artistes took to social media to pay tribute to the producer.

Roach’s business partner, Justus Arison, was in disbelief. He posted, ‘Rest in peace, Patrick Roach Samuels. My brother and partner inna music. Legendary producer and songwriter. Not to mention comedian. Roller. Father. Survivor. One of the realest people mi ever know in life. Gone too soon. Live on forever thru your many youths and music.”

Mavado’s manager, Julian Jones-Griffith, tweeted, ‘Roach, such an indomitable spirit, two decades of nuttn but good memories of him. Real survivor from nothing to something. Gone too soon.’

Roach’s artiste, Villionaire, told The Gleaner he got the news about his mentor’s death in a text from Arison.

“Mi not even sure how mi meet Roach, but mi feel like mi know him fi years. Music was his love. Him never pree fi hurt nobody. Roach was like a dancehall encyclopedia. He was a great person,” Villionaire said.

International artiste Sean Paul was also among those to comment, saying life needs to be more precious.

“RIP Roach, condolences 2 ur fam … Life needs to be more precious!! Still wit all the heartbreak we face everyday, we give thanks.”

Still others denounced the killing of the outspoken producer, noting that though he was known to speak his mind, he never meant any harm.

Roach made his last cameo in Assassin, aka, Agent Sasco’s Shell music video. The police are yet to ascertain a motive for the killing.

For the original report go to http://jamaica-gleaner.com/gleaner/20130916/ent/ent1.html