Committee Eager To Complete Deliberations On Revision Of Penalties

Farmers Urged To Be Careful When Buying Plants 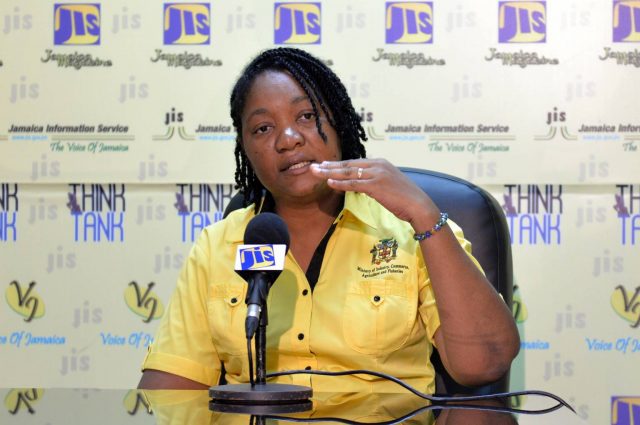 Photo: Deputy Research Director of the Crop and Plant Protection Unit, Research Development Division in the Ministry of Industry, Commerce, Agriculture and Fisheries, Michelle Sherwood, addresses JIS ‘Think Tank’ on May 12, about the Beet Army Worm and its impact on farmers.

The Rural Agricultural Development Authority (RADA) is urging farmers to be careful when purchasing plants, to avoid the Beet Army Worm (BAW).

Speaking at a JIS ‘Think Tank’ on May 12, Deputy Research Director of the Crop and Plant Protection Unit, Research Development Division in the Ministry of Industry, Commerce, Agriculture and Fisheries, Michelle Sherwood, said farmers outside St. Elizabeth who are planning to expand production, especially scallion, should be careful not to cause a spread in the outbreak, which could threaten other crops.

“We are discouraging farmers, especially at this time of the year, from buying scallion from St. Elizabeth. We have found that whenever farmers move the crops from affected areas, it ends up in St. Catherine, Clarendon and St. Thomas, and this makes the control mechanism more difficult,” she noted.

Mrs. Sherwood added that the best time of the year to buy crops from St. Elizabeth is during the cooler periods when the BAW is less likely to infect the crops.

“The BAW is a pest that we have had in the country for many years, and it is present on a number of plants, including melon, tomato, onion and scallion, which is its favorite,” she explained.

“St. Elizabeth is the largest production area for scallion in Jamaica, and this particular crop is one of the most preferred hosts for the BAW to reproduce,’ Mrs. Sherwood said.

She warned that when farmers buy from these areas, there is a high possibility that the pest will be transported, especially because the eggs can be hidden in the plant.

Mrs. Sherwood said farmers must thoroughly examine their plant materials before they place them among existing crops, if they decide to buy from the infested areas.

“Clean the crop properly, wash the strips and remove the dead outer leaves. The pest can also be seen if you hold up the plant against the sunlight. You will see the leaves that are infested. I would encourage treating the plant by dipping it into a solution of pesticide, and soak the planting material for about 10-15 minutes. In this way, you will significantly reduce the infestation and spread of the BAW,” she advised.

She said that while this outbreak has not occurred in many other areas in Jamaica, she is still advising farmers to practise crop rotation to avoid future outbreaks.

“In other areas of the country that we visited, such as the Hills of St. Andrew, they don’t keep the scallion in one location. They literally follow the sun and plant where the sunlight is, so there is crop rotation taking place,” Mrs. Sherwood said.

Principal Director, Training Division, RADA, Marina Young, said it is very important that farmers understand, in the event of any outbreak, what the trigger factors are that will cause spreading.

“Based on the analysis of the situation, we identified that there are factors that are related to the climatic conditions, which are beyond our control,” she said.

She said while farmers are trying to capitalise on the demand and supply opportunities, they must exercise wisdom in their approach when expanding crop production.

Mrs. Young said the Ministry and RADA have developed strategies, including budgetary support, to deal with the outbreak as an immediate response.

She said crops that have been affected and are also likely to transport the BAW are onion, tomato, cucumber, watermelon, callaloo and beetroot.

Mrs. Young said that approximately 297 farmers have been affected directly, and among those are farmers who completely lost their crop, which will require replanting.

The BAW outbreak is evident in Spring Ground, Duff House, New Forest in Manchester; and Comma Pen and Bull Savannah in St. Elizabeth.