Kingston, Jamaica – The Minister of Culture, Gender, Entertainment and Sport, the Honourable Olivia Grange has announced that the Grand Finale of the Jamaica 60 Festival Song Competition gets underway at the National Indoor Sports Centre (NISC), National Stadium Complex, on Thursday, July 28, starting at 8:30 p.m. 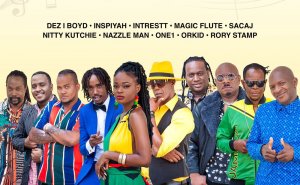 Minister Grange says that 10 songs will be jostling to be the Festival Song this year as Jamaica marks our 60th Anniversary of Independence, our Diamond Jubilee, under the theme, Re-igniting A Nation for Greatness.

”The songs are Jamaica Sweet Again by Dez I Boyd who was a finalist in the 2021 Festival Song Competition with the song Rumba Box. The other entries are Jamaica Nice Again by Inspiyah; Rock to da Beat by Intrestt; I’m A Proud Jamaican by Magic Flute; Out of Many by Nazzleman, who won in 2016 and 2018; Defend Jamaica by Nitty Kutchie; Sixty by Onel; Diamond Jubilee by Orkid; Bring Back the Love by Rory Stamp and Nub Web Nice Like Yard by Sacaj.

”The Prize money is Three Million Dollars ($3M) to be split between, producer, writer and singer.” The show will also be aired LIVE on TVJ and PBCJ and streamed LIVE on the JCDC website, YouTube channel and the Ministry’s and the Honourable Olivia ‘Babsy’ Grange Facebook pages.