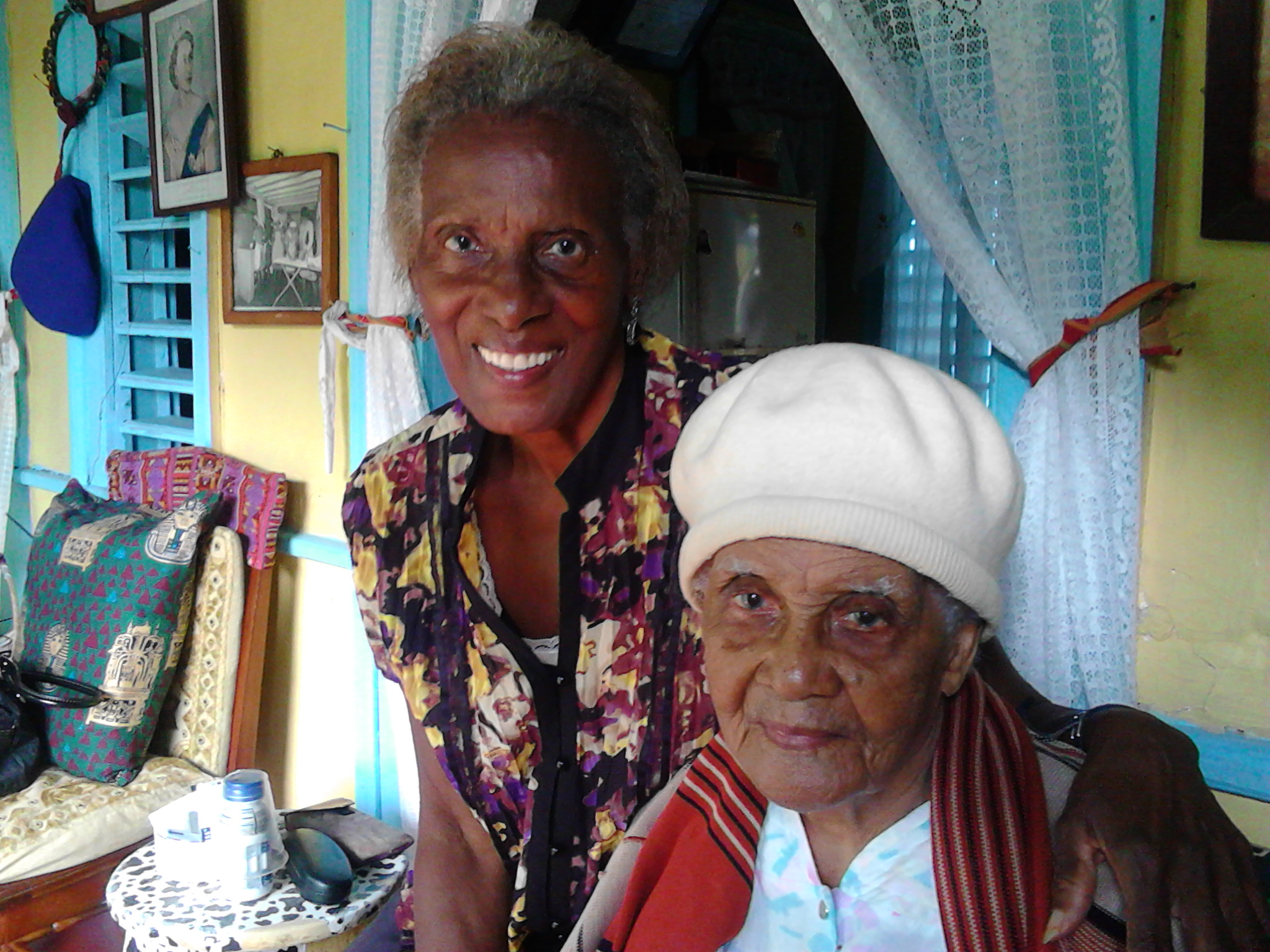 It was a cool Sunday night 20, 2015 that I decided to travel the long and winding mostly unpaved but shorter route to visit my friend and motivator Mrs Flossie Louise White-Russell better known, and affectionately called Aunt Flossie.

At 106 Mrs Flossie Russell is a national treasure. Her memory is that of an elephant …. witty, engaging despite her age. She was born August 8, 1909 in York District, Bensonton, St. Ann, Jamaica W. I.

Her sense of humour is legendary, always cheerful Aunt Flossie as the centurion is affectionately called, has been God fearing for almost all her years and up to 2013 still preached sermons at her local Methodist church in Bensonton.

She attended the Benonton Elementary School and was later employed there as a Pupil Teacher (as pre trained teachers were referred to in those days). I was Married Henry KerrWhite her husband predeceased her. The union produced three sons. “My church family never failed to visit and shower love on me” Aunt Flossie remarked with a twinkle in her eyes. “My parents
were from this area. Their union produced nine children and I am the seventh. Each year my family and friends take the long drive here to York District to celebrate my birthday with me…. you have been here on many occasions Mr. Dennie” she reminded …. as if I needed a reminder.

“Yes, you are correct Aunt Flossie” … uttered Mrs Claris Green-Smith (Aunt Claris) her very close friend and church sister who migrated to the USA but visits regularly. “Have known Aunt Flossie for over sixty years … we attend the same church … she has been a friend of my family for over ninety years” as Aunt Claris embraces her heroine.

Aunt Flossie’ s caregiver is very attentive to her, the care she receives quite evident as she (Aunt Flossie) is always clean and the place is tidy.

“My mother Catherine Lawes who was married to my father Henry Kerry White from Concord District …. they were both from the same area generally referred to as Bensonton.

I worked at Fern Court Preparatory School on the death of my husband on the 4th July 1960. Worked at various other schools including Clarendon College 1966 as Assistant Matron until 1968 … I left there because I could not attend church … later Home Craft Domestic Training Centre for 11 years …. in 1979 Higgins Basic School. I was now able to go to church… then I finally retired in 1980.”

“In 1956 I became a lay Preacher … even when I left the area I would return to do my preaching duties. I last preached in 2013 at 104” Aunt Flossie confided.

“I have preached in all the 13 churches in this District of Beechamville … and Bensonton circuits. Also I have given Communion in all the 12 except Beechamville. I was not able to make it that day” the 106 year old bemoaned with a sparkle in her eyes that radiated bliss, a spectacle not able to adequately describe.

“In 2008 on the 3rd March to be exact, I broke my hip yet managed to walk again … the accident happened at church”

“At 100 the Queen sent me a congratulatory letter and Certificate … I was very pleased.”

Of her three births two have predeceased her Ira at two and a half years old and Melbourne at 57 years old. Still alive is Horace Hartley Russell, a retired Civil Servant who resides in Kingston.” With a clarity of thought that beguiles her 106 years, as she related her life and times.

“Mrs Stacey Callum, a mother of 4 is my caregiver … she lovingly takes care of me.” Aunt Flossie stated.

“I attribute my long life to love of God, living a decent life …. also I like my oats and will have porridge and milo anytime. I enjoy reasonably good health”

Dr. Nicholson praised his patient Aunt Flossie for her longevity and boasted on having her as his patient … he attributes this to her “sense of humour.”

“The people, my church family Rev. Litchmore, District Superintendent, and Rev. Raquel Fleming, circuit deacon, have all treated me well like fine gold … must mention my caregiver Stacey and last but not least (Aunt Claris) Mrs Claris Green-Smith for always being there for me.” Mrs Flossie Louise White-Russell 106 plus concluded.

It was my honour and pleasure to bring to Vision readers worldwide this rather fascinating human interest story of determination and dedication to service in Christ’s vineyard.

I was awe struck if not being transformed at her revelations.

Hopeton O’Connor-Dennie, is the senior international correspondent & photojournalist for Vision Newspaper Canada, who visted Aunt Flossie Russell 106 plus and filed this exclusive interview.