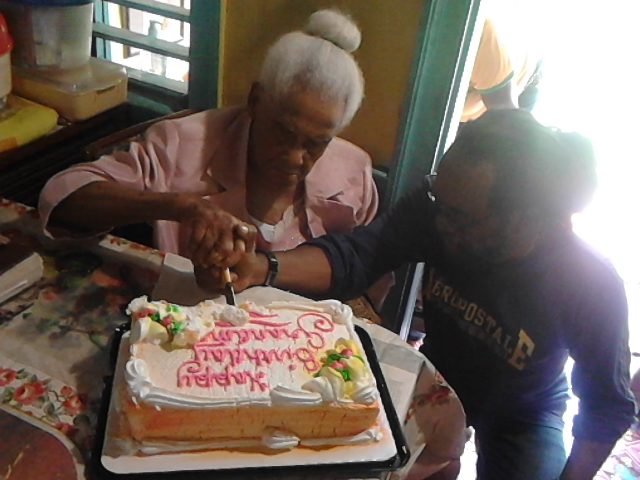 108 year old Flossie Russell is assisted by nephew at right to cut one of the many cakes she got on her birthday, August 2017.

Perspective: It was our usual pilgrimage to York District, Bensonton, St. Ann, Jamaica W.I. on August 7,  to celebrate with blood relatives, church family,  friends and well wishers yet another birthday for Mrs. Flossie Louise Russell, more affectionately called Aunt Flossie by friends and all.

Aunt Flossie now 108 can be likened to a Duracell Bunny still ticking … outlasting the ordinary.Still alert, vibrant, and positive … still walking at 108. He mind was is ticking like Big Ben … not missing a beat.

It was a sunny day as birds of all species chirped, including the quaki …. a black noisy vulture type bird not seen everywhere in Jamaica. It has a distinct noisy chirp. In a distance it could be easily be mistaken for a young John Crow … it was described as a predator that preys on the eggs and young of other birds.  The John Crow is known  locally as our vulture.

Flashing a radiant, welcoming  smile and sitting at her trademark vantage point  …  a closed clear glass French type window overlooking the walkway to her elevated landscaped modest two bedroom cottage is Aunt Flossie. At 108 Aunt  Flossie is surprisingly very aware and in full control of happenings in her neck of the woods. In Jamaica we say  “she de pan top of tings.”  according to our Jamaican dialect or patois … a broken English referred to as our first language by Education Minister, Senator The Hon. Ruel Reid … spoken mostly by the unschooled as a substitute for formal (Queen’s) English.

After prayers and a sumptuous meal two cakes were cut and distributed to eager lips. Aunt Flossie replied “Watch your words, watch the things you say” was the sound, wise words from the noted centenarian.

The abundance of cakes reminds us of an event that likely sparked the French Revolution of 1789 … Marie Antoinette’s declaration “let them eat cake”… seen then as uncaring by the French. That comment is believed to have infuriated the French who later beheaded her, their Queen. There were at least three decorated birthday cakes …. almost more than the law allowed, but a clear indication of our love for Aunt Flossie.  Unlike in France … this event on the contrary was a very pleasant revolution to honour the undisputed matriarch, Queen of York District, and the head of her household, a well respected centenarian in the person of Aunt Flossie celebrating 108 years young … going strong.

Aunt Flossie has been a Godfearing Methodist who has lived an exemplary life also as a lay preacher … never riotious nor a spendthrift.

We wish Aunt Flossie all the success … she is a real blessing to us all.

Hopeton O’Connor-Dennie who is Vision’s Senior International Correspondent & photojournalist was there and filed this report for Vision Newspaper.