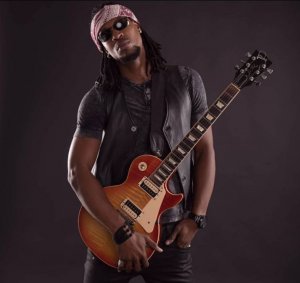 Indeed those words sum up the growth of not only his music, but his worldwide fan base that have reciprocated Omari’s hard work and dedication to his craft. From his acclaimed performance at the St.Kitts Music Festival, to sold out performances in the States, Omari’s cup is indeed Half Full !

On the footsteps of his recent released singles “Half Full or Half Empty” (Omari Banks Music), and “You’re Gonna Make It” (Rasta Soul Riddim by Upsetta Records), and armed with his guitar, Omari and his distinctive style blending rock, reggae and blues gave New Yorkers a performance they soon will not forget. The singer-guitarist took the stage at Joe’s Pub music venue, the popular spot where Eartha Kitt, Elvis Costello, Amy Winehouse, Jason Mraz, Adele, Lady Gaga and Alicia Keys and others have all performed. “Following his impressive set that I had the pleasure to witness at St.Kitts Music Fest, on the same night as Buju Banton, it was great to see Omari in this intimate setting with superb acoustic and savor his spectacular musicianship” – Pat Meschino, Billboard journalist.

Immediately thereafter, Omari returned to Baltimore where he previously left his mark in 2017 at the 36th annual 2017 Artscape, America’s Largest Free Arts Festival and in 2018 for the Hot August Music festival. The show was met with great anticipation and indeed fans came in droves and sold out The Soundry venue. “I had my first sold out ticketed show in Baltimore, this for me was a very satisfying experience as not only was it a full house but there was an energy during my performance that had people really in tune with the songs and messages throughout the set. It was a great vibe” – stated Omari

Omari followed up the next day with an intimate performance and meet-and-greet in Boston, to then wrap up his US stay with yet another exciting show in Virginia at Tin Pan. There fans of Omari and music lovers were treated by the multi-award winner a musical experience that ran the gamut of life experiences through music from From “Reggae Summertime” to “Naturally” to “System Set”, his music is truly a common thread commentary. Speaking on touring, Omari explained “Touring is extremely important and I am able to connect with the friends and fans in different areas who supported me throughout the years as well as I am able to meet new people which brings great joy to me. In addition being the kind Artist that loves the live stage and a band show I am at my happiest performing live.“

As the end of the year approaches, Omari Banks is headed to Jamaica from September 30th to October 5th, to continue on his musical promotional trail, and for studio recording with some of the islands most talented producer and musicians for his forthcoming EP/album.