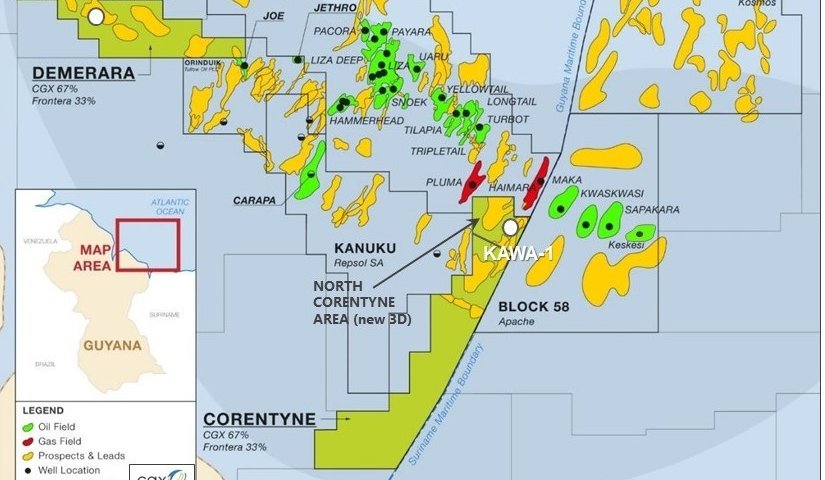 (1) Block acreage reflects the proposed 25% relinquishment that has been submitted to the Government of Guyana in connection with moving to the second renewal period of the Corentyne and Demerara PPLs. Final relinquishment details remain subject to government approval. (CNW Group/Frontera Energy Corporation)

Kawa-1 Exploration Well in Corentyne Block, Guyana to be Spud in 2H21

TORONTO, Feb. 16, 2021 /CNW/ – Frontera Energy Corporation (TSX: FEC) (“Frontera” or the “Company“) and CGX Energy Inc. (“CGX“), joint venture partners (the “Joint Venture“), are pleased to announce the completion of an independent Prospective Resource study and report (the “Resource Report“) in respect of the Corentyne North Area, Corentyne Main Area and Demerara block, offshore Guyana. The Joint Venture is also pleased to announce the successful rescheduling of the Joint Venture’s work commitments with respect to its Petroleum Prospecting License (“PPL“) for the Demerara block offshore Guyana.

“We thank the Government of Guyana for its continued support and partnership, which are essential to the long-term success of this strategic initiative for the benefit of all stakeholders.” said Gabriel De Alba Chairman of the Board of Directors. “As confirmed by the independent resource evaluation commissioned, the Guyana basin offers the Joint Venture access to a leading offshore oil opportunity. We expect a robust Guyana work program with the advancement of our exploration wells, as we continue executing on our plan to realize this value for our shareholders.”

“The independent prospective resource study reaffirms our excitement about the world-class prospectivity of the Corentyne and Demerara blocks offshore Guyana,” said Richard Herbert, Chief Executive Officer, Frontera. “With the support of the Guyanese government in rephasing our exploration plans, we are eagerly progressing our work programs for Corentyne and Demerara.”

The Joint Venture contracted McDaniel & Associates Consultants Ltd (“McDaniel“), an independent external qualified resource evaluator, to conduct a resource evaluation on its concessions in the offshore Corentyne and Demerara blocks in Guyana in the Guyana-Suriname basin. Frontera holds a direct working interest of 33.3% in both the offshore Corentyne and Demerara blocks and, taken together with its CGX share ownership of 73.8%, results in a total consolidated working interest of 82.6% in the blocks.

McDaniel’s evaluation was prepared as of August 31, 2020, in accordance with definitions of the National Instrument 51-101 Standards of Disclosure for Oil and Gas Activities (“NI 51-101“) of the Canadian Securities Administrators and the Canadian Oil and Gas Evaluation Handbook (“COGE Handbook“).

A total of 32 prospects were identified by McDaniel in both blocks (27 in the Corentyne block and 5 in the Demerara block). Frontera’s consolidated interest is equivalent to a mean volume of 6,089 MMboe unrisked and 1,090 MMboe risked. The fluid content considered for the prospects is mainly oil (64%), natural gas (28%) and the remainder condensate (8%). These results support management’s view that the blocks are highly prospective.

The independent external Resource Report was completed on October 21, 2020 and certain information contained in the Resource Report is summarized below. The table shows the prospects on the Corentyne North Area, Corentyne Main Area and Demerara block for Frontera’s consolidated working interest (82.6%) on an un-risked and risked basis.

The map below shows the location of the Joint Venture’s Demerara and Corentyne blocks in the Guyana-Suriname Basin, along with peer discoveries.(1)

The Joint Venture continues to advance its exploration program in both the Corentyne and Demerara blocks with well locations being selected by the Joint Venture.

In the Corentyne block, plans are proceeding on the Kawa-1 exploration well. Well design is complete, procurement of long lead items is in advanced stages and key technical staff have been recruited. The Joint Venture plans to spud the Kawa-1 exploration well during the second half of this year and expects to drill the well in a water depth of approximately 1,100 feet targeting the Campanian-Santonian-aged stratigraphic trap, interpreted to be analogous to the discoveries immediately to the east on Block 58 in Suriname. Additional prospects and leads on the northern portion of Corentyne have been identified and are being matured by the Joint Venture.

In the Demerara block, the Joint Venture continues to advance its preparatory work for the Makarapan-1 exploration well (previously called Demerara-F), an Aptian stratigraphic prospect on the block. Additional prospects and leads on the block have been identified and are being matured by the Joint Venture.

The Joint Venture completed negotiations with the Government of Guyana regarding rescheduling work commitments with respect to its PPL for the Demerara block in offshore Guyana. The Joint Venture has been advised that the existing February 12, 2021 deadline for drilling the next well will be extended to February 11, 2022 subject to documentation.

Frontera Energy Corporation is a Canadian public company and a leading explorer and producer of crude oil and natural gas, with operations focused in South America. The Company has a diversified portfolio of assets with interests in more than 40 exploration and production blocks in Colombia, Ecuador and Guyana. The Company’s strategy is focused on sustainable growth in production and reserves. Frontera is committed to conducting business safely, ethically in a socially and environmentally responsible manner. Frontera’s common shares trade on the Toronto Stock Exchange under the ticker symbol “FEC”.

If you would like to receive News Releases via e-mail as soon as they are published, please subscribe here: http://fronteraenergy.mediaroom.com/subscribe.

Cautionary Note Concerning Forward-Looking Statements. This news release contains forward-looking statements. All statements, other than statements of historical fact, that address activities, events or developments that the Company believes, expects or anticipates will or may occur in the future (including, without limitation, statements regarding the ongoing impact of the COVID-19 pandemic on the Company’s operations, estimates and/or assumptions in respect of the Company’s exploration and development plans and objectives, including its drilling plans and the timing thereof, the timing and receipt of approvals and final documentation from the Government of Guyana and other regulatory approvals) are forward-looking statements. These forward-looking statements reflect the current expectations or beliefs of the Company based on information currently available to the Company. Forward looking statements are subject to a number of risks and uncertainties that may cause the actual results of the Company to differ materially from those discussed in the forward-looking statements, and even if such actual results are realized or substantially realized, there can be no assurance that they will have the expected consequences to, or effects on, the Company. Factors that could cause actual results or events to differ materially from current expectations include, among other things: volatility in market prices for oil and natural gas (including as a result of a sustained low oil price environment due to the COVID-19 pandemic and the actions of OPEC and non-OPEC countries and the procedures imposed by governments in response thereto; the duration and spread of the COVID-19 pandemic and its severity; uncertainties associated with estimating and establishing oil and natural gas reserves and resources; liabilities inherent with the exploration, development, exploitation and reclamation of oil and natural gas; uncertainty of estimates of capital and operating costs, production estimates and estimated economic return; the Company’s ability to access additional financing; political developments in the countries where the Company operates; the uncertainties involved in interpreting geological data; geological, technical, drilling and processing problems; timing on receipt of government approvals and the other risks disclosed under the heading “Risks and Uncertainties” in the Company’s MD&A dated November 3, 2020 and under the heading “Risk Factors” and elsewhere in the Company’s annual information form dated March 5, 2020 filed on SEDAR at www.sedar.com. Any forward-looking statement speaks only as of the date on which it is made and, except as may be required by applicable securities laws, the Company disclaims any intent or obligation to update any forward-looking statement, whether as a result of new information, future events or results or otherwise. Although the Company believes that the assumptions inherent in the forward-looking statements are reasonable, forward-looking statements are not guarantees of future performance and accordingly undue reliance should not be put on such statements due to the inherent uncertainty therein.

The term “boe” is used in this news release. Boe may be misleading, particularly if used in isolation. A boe conversion ratio of cubic feet to barrels is based on an energy equivalency conversion method primarily applicable at the burner tip and does not represent a value equivalency at the wellhead.

Resource definitions, including those set out below, are set out in NI 51–101, and in the COGE Handbook.

“Resources” encompasses all petroleum quantities that originally existed on or within the earth’s crust in naturally occurring accumulations, including discovered and undiscovered (recoverable and unrecoverable) plus quantities already produced.

“Prospective Resources” are defined as those quantities of petroleum estimated, as of a given date, to be potentially recoverable from undiscovered accumulations by application of future development projects. Prospective resources have both an associated chance of discovery and a chance of development. Prospective resources are further subdivided in accordance with the level of certainty associated with recoverable estimates assuming their discovery and development and may be sub-classified based on project maturity.

Estimates of resources always involve uncertainty, and the degree of uncertainty can vary widely between accumulations/projects and over the life of a project. Consequently, estimates of resources should generally be quoted as a range according to the level of confidence associated with the estimates. An understanding of statistical concepts and terminology is essential to understanding the confidence associated with resources definitions and categories.

“Prospect” is defined as a potential accumulation within a play that is sufficiently well defined to present a viable drilling target.

The range of uncertainty of estimated recoverable volumes may be represented by either deterministic scenarios or a probability distribution. Resources should be provided as low, best and high estimates, as follows:

The resource estimates presented above are subject to certain risks and uncertainties, including those associated with the drilling and completion of future wells, limited available geological and geophysical data and uncertainties regarding the actual production characteristics of the reservoirs, all of which have been assumed for the preparation of the resource estimates. In addition, significant negative factors related to the Prospective Resource estimate include a lack of infrastructure and transportation in the Corentyne and Demerara area and the capital expenditures and financing required for the joint venture to satisfy its obligations under the petroleum agreements and its proposed drilling and exploration program. 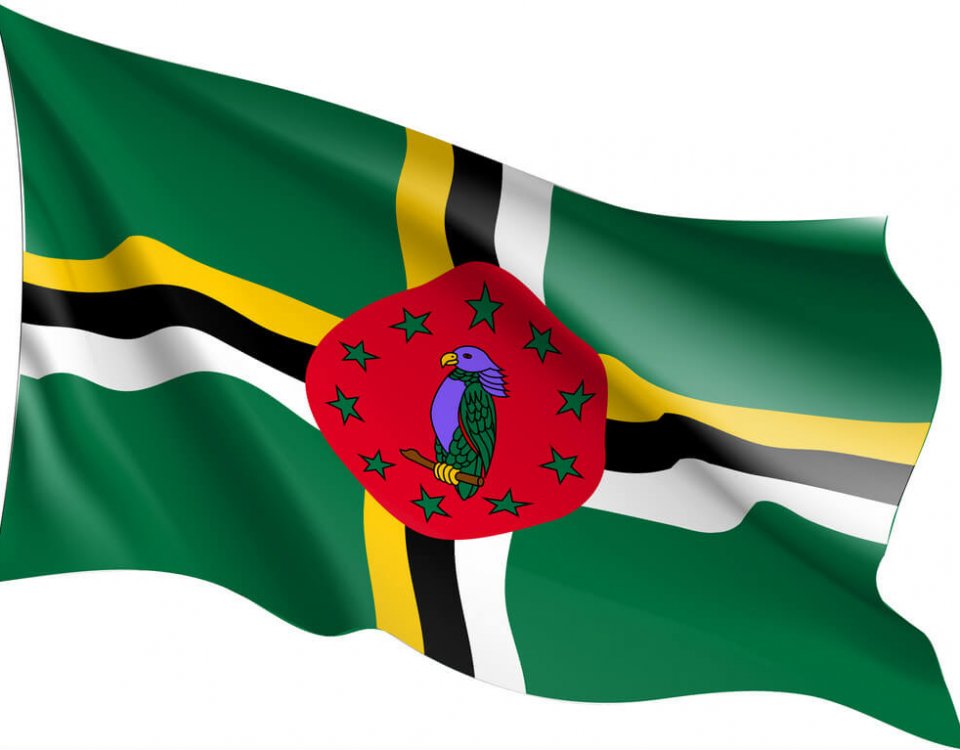