An all-white clad Fully Bad suspends from the sky as he towers over his Cassava Piece, St Andrew community, joined by angels on his left and right. It’s the album cover for his sophomore set, Gad A Earth. 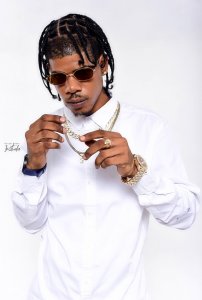 The lead single for the project is Composure, which will debut on December 10 as an audio + visual combination via his official VEVO channel. The track is being produced by SartOut Records.

The 20-track project is slated for release in January, a little over a year since he dropped his debut studio album, Born Fi Dweet.

The latter was an ode to his daughter, and showcased his lyrical versatility beyond the “gangster music” that has become his signature.

The track list will comprise of a mixture of singles ranging from songs about; partying, gangster culture, pop culture and 90’s themed dancehall songs which he placed under the term up-tempo songs.

As for his expectations, Fully Bad is aiming to reach the upper echelons of the music industry including but not limited to the Billboards and a Grammy nomination.

His Grammy aspirations are strengthened by the evolution of the reggae category in recent years with modern representations like Koffee and dancehall figures like Spice.