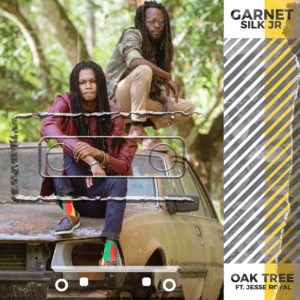 Evidently influenced by his father, the iconic Garnet Silk’s sound, the young crooner has crafted his own lane by meshing traditional reggae sounds with urban vibrations shaped by the likes of Michael jackson among others. The latter self-evident in his discography that already boasts an impressive body of work for such a young artist. “Oak Tree” will appeal to not only reggae lovers, but to music aficionado as a whole as the track possesses classic guitar rhythm, hypnotic bass boasts beautiful harmonized vocals.Speaking on the song’s meaning and inspiration, Garnet Silk Jr explained “Trees are sanctuaries. Whoever knows how to speak to them, whoever knows how to listen to them, can learn the truth. They do not preach learning and precepts, they preach, undeterred by particulars, the ancient law of life. Like all trees, we share a root system, our forefathers are our roots, study them. Persevere against the taunts of fear, hatred and doubt. The roots of wisdom are bitter, but the fruit is sweet. Know yourself.“A Reuben Order Records production, the single is scheduled to be released April and can be pre-ordered at https://VPAL.lnk.to/GarnetJesseOakTree