Garvey Museum to be Established in St. Ann

Improved Pass Rates for 18 of 34 Subjects in CSEC 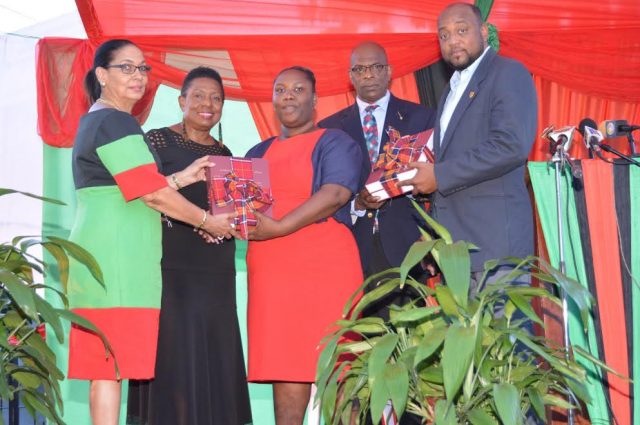 Minister of Culture, Gender, Entertainment and Sport, Hon. Olivia Grange (2nd left) and Minister of Labour and Social Security, Hon. Shahine Robinson (left), present a copy of the transcripts of Marcus Garvey’s mail fraud trial to the Regional Director of the Jamaica Library Service, Region 3, Ms. Merlene Walker (centre), for the people of St. Ann to have access. The presentation took place during a civic ceremony celebrating the 130th birthday of Garvey, Jamaica’s first National Hero. The ceremony was held at Lawrence Park in St. Ann’s Bay, St. Ann, on August 17. Sharing the occasion and also holding a copy of the transcript are Executive Director of the Jamaica National Heritage Trust, Dorrick Gray (fourth left), and Mayor of St. Ann’s Bay, Councillor Michael Belnavis.

Minister of Culture, Gender, Entertainment and Sport, Hon. Olivia Grange, says the Government is moving to clear National Hero, the Rt. Excellent Marcus Garvey, of all criminal charges that were laid against him in Jamaica.

Addressing a civic ceremony to commemorate the 130 th birthday of Jamaica’sfirst National Hero, held at Lawrence Park, St. Ann, on August 17, the Minister said a Bill is being finalised that is aimed at absolving a number of iconic Jamaicans, including Mr. Garvey, of what she described as “acts of liberation”.

The Bill will be presented to Parliament.

“We continue to argue that Garvey’s actions were not criminal, but were acts of liberation with moral justification. The Bill should be brought to the House in October to absolve National Heroes, including Garvey, and other freedom fighters of criminal liabilities arising from their acts of liberation and connected matters. By including Garvey in this Bill, we are moving to ensure that his record will be totally cleared,” the Minister said.

Ms. Grange said despite several failed attempts to get Marcus Garvey’s name cleared of criminal charges in the United States, the Government remains unrelenting in efforts to achieve that goal.

“As a country, we have done a number of things to honour this great son of Jamaica and to remove the blots against his name… . We cannot give up this fight to clear his name,” the Minister emphasised.

Meanwhile, Ms. Grange said in bad and good times, Jamaicans can take courage from the work of the National Hero as well as the statue which stands tall in Lawrence Park, St. Ann’s Bay.

“Garvey’s statue looms large, and is a reminder of his influence on the world stage, a reminder of his determination, not just to uplift black people but to help us understand our innate power. In true Jamaican style, Garvey showed that nothing is impossible, despite opposition,” the Minister added.

She praised Marcus Garvey for the role he played in influencing world leaders and power brokers to stop and take a look, not only at him and his work but at Jamaica, the country of his birth.

The Minister said that the government of Namibia has advised the Jamaican Government that the main street in that country’s capital, Windhoek, will be renamed in honour of Marcus Garvey, with the ceremony set for later this year.