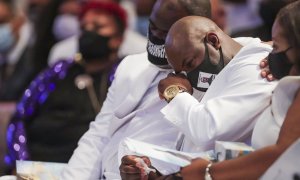 George Floyd Family at His Funeral

The proposed twenty seven million united states dollar settlement for wrongful death for the estate of George Floyd is just a start.  We are not seized with all the details, but we think it is just a start.

Reports are that a wrongful death suit was settled with the City Council and the Estate of George Floyd.  The release was very short on details.  Will there be other lawsuits?  There was talk about a Federal Bureau Of Investigation FBI probe into the murder of Floyd.  Will Hunan Rights issues be brought to bear. Floyd’s human rights and constitutional rights were violated big time. Those violations are certainly worth more than 27 million dollars.

For example how will the funds be paid out?  Will it allow the family to buy a house now and have enough left to educate all his children and feed them well?  Who will manage these funds? 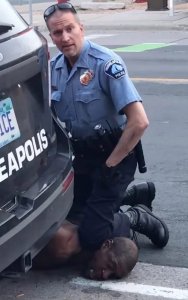 This was a most brutal death which from all appearances was racially motivated. Here was an unarmed black man being forced to suffocate on the ground with a knee on his neck.

This was disgraceful, demeaning, distasteful, despicable a degrading conduct.  Floyd did not deserve such indignity.  To kill an animal that way would be outlawed in most civilized societies.  This is just not acceptable conduct as it lacks basic humanity. There has to be a more humane way to administer justice.

The Black Lives Matter Movement must be commended for their determined and sustained actions.  In the face of tear gas, armed National Guards and arrests, the determined demonstrators of all races stood their ground.

Role Of the Media

The role of the media cannot he over stressed. For example: A CNN black journalist was detained, even handcuffed despite him being clearly identified and not provoking any violence.  An unarmed white senior citizen over seventy years old was pushed and fell bursting his head by police. Yes, there was looting, fires were lit and businesses torched, but by and large the protests were law abiding.

The flames were stoked by an uncaring president who cared little about black people.  His parading from the White House flanked by his Top Army Generals in front of a nearby church with Bible turned upside down is one of the degrading images of the whole episode.” It was the worse if times” much worse than Charles Dickens would have anticipated.  It was akin to the “Winter of despair”.  Trump mishandled the whole situation and paid the price with being kicked out of Office as a one term President. Happy riddance you bigot.

We will do further perspectives on this George Floyd’s settlement. This is not the last chapter in this saga. The trial of the racist leaning murderers is left to come. Stay tuned.

Hopeton O’Connor-Dennie is a social justice advocate who strives on human rights issues. A veteran journalist with International exposure.