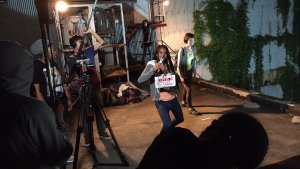 In Fall of 2019, the Erika Film Foundation announced that it would be funding the 2020 GFS International Thesis Project to South Korea. To prepare, GFS fellows were asked to write original short film scripts based on the culture of the country. The final result were two scripts titled MODERN EDUCATION (Written by Andrew Oh, Directed by Yeneca Kim) and NEIGHBORS (Written and Directed by Elisabeth Viel).

Before filming began, the Erika Film Foundation sponsored bi-coastal virtual table-reads packed with A-List talent including Sandra Oh, Rosalind Chao, Eva Longoria, Berry Jenkins, David O. Russel, John Cho, Lulu Wang, and others. The Hollywood powerhouses read the scripts aloud and provided the students with quality feedback so they could refine their scripts ahead of production.

Due to the unfortunate obstacles presented by the pandemic, students were asked to pivot and choose locations in the United States to complete their projects since travel to South Korea was no longer feasible during COVID-19.

“Our students overcame tremendous obstacles to skillfully adapt, prep, and shoot two original Thesis Films even as most US film production remained shuttered due to the COVID-19 pandemic. The Erika Film Foundation has been a dedicated and relentless supporter of our program over the years and 2020 has proven just how capable and passionate our students are. Their unshakable commitment is an inspiration to us all,” said Stosh Mintek, CEO Ghetto Film School.

“We are proud to have partnered with Ghetto Film School on this incredible opportunity to educate and support the next generation of filmmakers,” said Erika Olde, founder of the Erika Film Foundation. “This talented group of students persevered through a global pandemic to create two compelling short films. Their professionalism and commitment to their craft is worth celebrating.”

Thanks to the International Thesis Project and its partners, GFS fellows have traveled to London, Israel, and Rome to complete production of their films.  For more information on the Erika Film Foundation Thesis Film Project, please visit: https://www.ghettofilm.org/international-thesis-film

About Ghetto Film SchoolGhetto Film School (GFS) is an award-winning nonprofit founded in 2000 to educate, develop and celebrate the next generation of great storytellers. GFS annually serves 6,000 individuals, 14-34 years of age. With locations in New York City (est. 2000), Los Angeles (est. 2014) and London (est. 2020), GFS equips students for top universities and careers in the creative industries through two tracks: the Fellows Program – an introductory education program for high school students, and the Roster – an early-career support for alumni and young professionals. Our Fellows Program is a 30-month cinematic storytelling course for high school students. Roster ensures opportunities for GFS alumni and other young professionals, so that media professions become accessible to more diverse future generations of visual storytellers. https://www.ghettofilm.org

About the Erika Film FoundationThe Erika Film Foundation helps aspiring young filmmakers by providing them with the education, tools and networks needed to pursue successful careers in the film industry. Through hands-on mentoring, internship opportunities, filmmaking grants and an active, growing network that connects students with experienced industry professionals, EFF is creating meaningful opportunities for these young adults. EFF was founded by film producer Erika Olde in an effort to improve the path for young adults to break into the industry in hopes that this will introduce better talent, increase representation and improve the culture in the entertainment industry, ultimately resulting in better movies. https://erikafilmfoundation.org