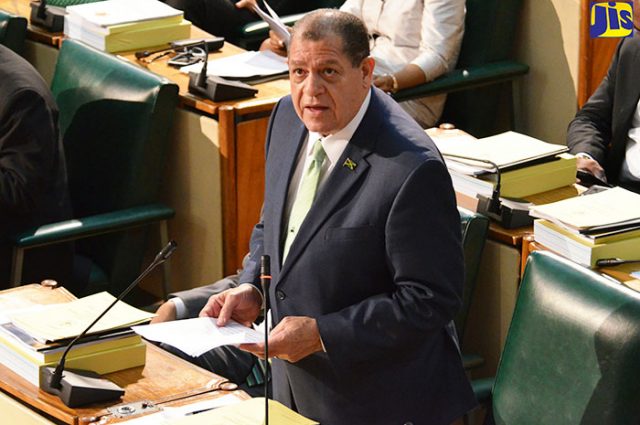 Minister of Finance and the Public Service, Hon. Audley Shaw, speaking in the House of Representatives on Thursday (February 9) after tabling the 2017-18 Estimates of Expenditure.

The Government has presented a budget of $710 billion for the fiscal year 2017-18, with $485 billion allocated for recurrent (housekeeping) expenses and $225 billion for capital (development) spending.

Details of the projections are outlined in the Estimates of Expenditure, which were tabled in the House of Representatives, yesterday (February 19), by Minister of Finance and the Public Service, Hon. Audley Shaw.

The Ministry of Finance and the Public Service has been allocated the largest sum, with $208 billion for recurrent expenses and $177.6 billion for capital expenditure.

A large portion of the sum will go towards meeting Jamaica’s debt obligations.

Large sums have also been allocated to several other Ministries by the Government.

The Ministry of Education, Youth and Information gets the second largest amount with $98.7 billion for recurrent expenses and $1.67 billion for capital spending.