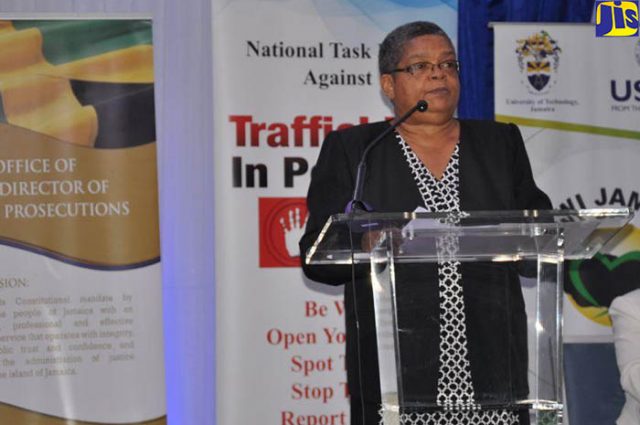 Permanent Secretary in the Ministry of Justice, Carol Palmer, says the Government is strengthening the environment for the investigation and prosecution of cases of human trafficking.

She said that traffickers are coming up with new ways everyday to carry out their heinous acts and the State must bolster the institutional capacities “to allow for the aggressive investigation and swift prosecution of offenders.”

“There is no investigation separate from prosecution…it is just one flow…one continuum,” she noted.

Mrs. Palmer was addressing the opening of a three-day Prosecutors’ Human Trafficking Training Seminar at the Royalton White Sands in Trelawny on February 16.

She argued that human trafficking is one of the most heinous crimes known to man and must be vigorously pursued and eliminated.

She said that the victims of human trafficking have been dehumanized where their “persona has been taken from them” and where they have been forced to submit and “do as they are told.”

She pointed out that the amendments to the Trafficking in Persons Act, now before Parliament, will ensure that there is stronger enforcement of the law to deter persons from engaging in the crime.

“We cannot be reluctant to thoroughly investigate and aggressively prosecute persons, who are involved in human trafficking because they are powerful, influential or well connected,” she noted.

“Prosecutors must also be trained in victim identification and protection. They must work together with investigators to protect victims and their families from intimidation from traffickers,” she added.

Mrs. Palmer said it is also imperative to identify intermediaries “who enable, facilitate and provide safe and secure front for persons, who procure those activities.”

“We have come to learn that social media is very serious business,” she noted.

“Be careful what you put on social media. Youngsters, in particular, love to post their whereabouts and also about where they are planning to go. We have to become social media smart as the traffickers are very versed and are actively looking out for any opening they can find,” she urged.

Mrs. Palmer said that even as Jamaica pursues the establishment of a multi-door court system, which places greater focus on dispute resolution and rehabilitative rather than punitive sanctions “there is no contemplation of human traffickers to benefit from mediation or restorative justice processes.”

“A strong prosecutorial framework does not advocate for the imposition of suspended sentences…fines or administrative penalties in place of prison sentences,” she declared.

Human trafficking is considered a transnational crime with the primary objective of gaining profit through the exploitation of human beings.