Dancehall History At House Of Dancehall

Pilot Phase of Electronic Tagging Coming to an End 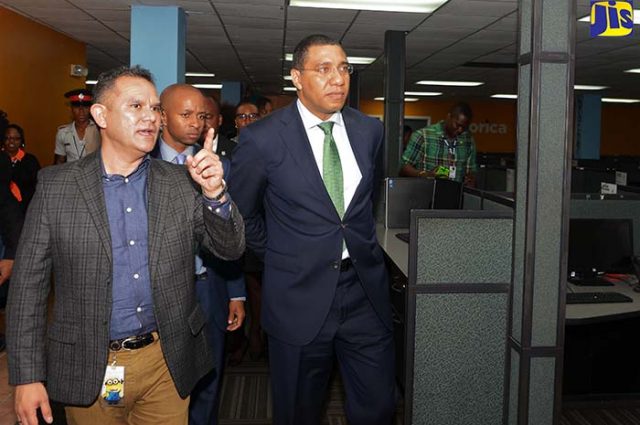 With 30,000 persons set to secure jobs in business process outsourcing (BPO) operations, over the next five years, the Government is focused on providing the sector with the necessary institutional support.

The industry, which has a global value of US$104.6 billion, is gradually expanding in Jamaica, and with high-end jobs on the horizon, the Government is ensuring that a trained workforce is available and that there is financing for its expansion.

“Every couple of weeks, there are people coming in; we just have to be welcoming to these people, and ensure that their needs are met,” states member of the Economic Growth Council (ECJ), Paula Kerr-Jarrett, in an interview with JIS News.

Mrs. Kerr-Jarrett was part of a high-level team from Jamaica, led by Minister without Portfolio in the Ministry of Economic Growth and Job Creation, Hon. Daryl Vaz, which visited the Philippines, recently, on a fact-finding mission, to learn from the success that country is having with the BPO industry.

Stressing that progress has been made from the visit, she informs that one of the companies with which they met has come to Jamaica, and will make an official announcement soon.

She says that the BPO sector is ranked high in the priorities of the ECG, and that the Jamaican workforce is greatly valued by operators in the industry.

Jamaica, she reasons, is not trying to make itself good as BPO service providers as its track record is firm, given the skills of the workers.

“Our workers are some of the best in the world – we have the natural amenity to the culture of North America,” she says, adding that the running of BPO companies has no resemblance of the former garment factories.

“In this business, time is money,” she says, noting that every second lost due to gripes is bad business for all, so cooperation is encouraged and rewarded.

“The majority (of companies)…there is an incentive… bonus for the … time you spend on the phone, the more issues that you resolve for the clients,” Mrs. Kerr-Jarrett, who is also a BPO investor, explains.

Of significant note, she says, are the BPO facilities, which have recreational spaces, such as game rooms for the leisure of staff, rest rooms, cafeterias, food vouchers, and green space.

Global Vice-President at Vistaprint, Serena Godfrey, says the company sees “Jamaica as a complete asset, and they pay their employees in United States dollars, as well as pay up to $200,000 annually for workers, who are in good standing, to pursue tertiary education”.

“Every time they acquire a new skill, we pay them, even if they don’t use it for six months,” she tells JIS News. She adds that Vistaprint, which has 1,000 employees in Jamaica and operations in 11 countries, places their workers at the centre of their investment.

The company operates a mentoring programme for its staff, where they are encouraged into leadership and skills development.

Vistaprint was first established in Jamaica in 2003, after its founder, Robert Keane, vacationed in Montego Bay and was impressed by the hospitality of hotel staff.

Meanwhile, as the industry further develops, day-care facilities will be established for the benefit of workers with children.

“We need to be patient, the more traction we get, the more incentives and support services workers will get,” Mrs. Kerr-Jarrett shares.

With regards to financing for the sector, Prime Minister, the Most Hon. Andrew Holness, recently gave instructions for the Factories Corporation of Jamaica (FCJ), the Development Bank of Jamaica, and Jamaica Promotions Corporation to collaborate and establish an investment fund for BPO expansion.

The education sector has also been playing its part in providing a skilled workforce for the sector.

To this end, the HEART Trust/NTA and other institutions have introduced BPO-focused training. The Portmore Community College has also partnered with Sutherland Global Services in offering an associate degree, so that the company can triple its 3,000 workforce in three years.

The Associate Degree in Business Process Management (BPM), is done over a two-year period, in a specialised career-track programme, with a requirement of 240 hours of work experience.

Internships are done at the company’s Kingston and Mandeville facilities. The programme is now being offered at the Portmore and Old Harbour campuses, and, come September, it will be available at all the community colleges.

In the case of the PAJ, it has invested more than $10 billion in BPO facilities, in Kingston, Montego Bay, and Portmore.