Coalition for Tobacco Control Concerned About Smokers in Low-Income Category

Gov’t Working to Reduce Use of Force – PM 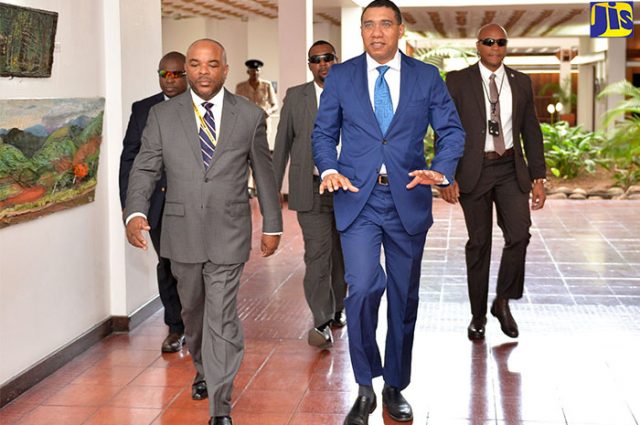 Photo: Prime Minister, the Most Hon. Andrew Holness (right foreground), speaks with Commissioner, Independent Commission of Investigations (INDECOM), Terrence Williams (left foreground), as they make their way into the Jamaica Conference Centre, downtown Kingston, for the inaugural staging of the Caribbean Use of Force in Law Enforcement Conference on Wednesday (May 31).

Prime Minister, the Most Hon. Andrew Holness, says the Government is working to address the over-reliance on the use of force in policing.

He said the method has not been successful in maintaining the rule of law and public order.

“So, I am totally seized of the importance of entering Jamaica into a new paradigm of engendering rule of law and public order and it starts with a rights-conscious, citizen-conscious, evidence-based sort of law enforcement and policing,” he said.

The Prime Minister was addressing the opening of the inaugural Caribbean Use of Force in Law Enforcement Conference at the Jamaica Conference Centre in downtown Kingston on Wednesday (May 31).

He noted that the State is seeking to ensure that the country’s law-enforcement agencies operate in such a way that creates trust, builds confidence, bridges the gaps and makes the public feel that there is no need to fear the police, and that the best solution is to cooperate.

Mr. Holness said the security forces oversight body, the Independent Commission of Investigations (INDECOM), is an important part of the process.

He said further that as it will take some time to equip the “police forces” with other means of enforcing the law, there must be an institution with integrity that is “well respected” and “well-resourced”, to investigate when issues occur that result in the abuse of rights or loss of life.

Mr. Holness added that the Administration wants INDECOM to see itself as supporting the police in reaching the highest standards and employing the alternative methods of law enforcement for the common good of securing Jamaica.

In the meantime, the Prime Minster welcomed the conference, noting that it is an opportunity for the Government to restate its commitment to the advancement of human rights and the development of citizen and rights-conscious law and public order enforcement services.

“It is anticipated that this conference will consider these issues and will propose the establishment of procedures and protocols that will strengthen the relationship between communities and law-enforcement officials. In so doing, progressive steps towards the reinforcement of public support, for public safety and the rule of law, will be achieved across the region,” he said.

In his remarks, Ambassador of the United States to Jamaica, His Excellency Luis Moreno, thanked the Prime Minister for his leadership in protecting the rights of citizens and working to reduce the use of force by security personnel.

He noted that the conference will help to facilitate continued dialogue on how to foster healthy police-community relations, how to prevent police abuses, minimise civilian fatalities, and gain their trust.

For his part, High Commissioner of the United Kingdom to Jamaica, His Excellency David Fitton, noted that use of force in law enforcement is something the UK has taken seriously over the years, but “has not always gotten it right”.

“I am hoping that by supporting what happens here in Jamaica, and in the wider Caribbean, we can learn from some of the lessons in the past and provide a basis for producing a model policy in the future,” he said.

He noted, further, that with a 50 per cent reduction in police-related shootings in Jamaica over the years, the country has much to impart to the Caribbean in terms of the use of force.

The three-day conference is an initiative of INDECOM and the United Nations in Jamaica, and is being staged with support from the UK’s Department for International Development (DFID) and the embassy of the United States of America.

The objectives are to draft a Model Use of Force Policy for Caribbean Security Forces; encourage implementation, or improvement, of legislation and policies regarding use of force by Caribbean security forces; inform upgraded training on the use of force; and assist supervisors and oversight institutions in their scrutiny of the use of force.