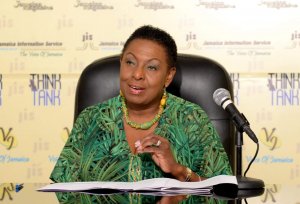 The Minister of Culture, Gender, Entertainment and Sport, the Honourable Olivia Grange, has condemned a video showing a violent confrontation between a man and a woman which is being circulated on social media. Minister Grange said she was “deeply disturbed” by the video and the allegation that a Member of Parliament was involved. Minister Grange has discussed the video with the Minister of National Security, the Honourable Dr Horace Chang, who has asked the police to investigate the matter. Minister Grange said: “The Government is firmly against acts of violence. This video is deeply disturbing and completely unacceptable. We cannot condone any act of gender-based or family violence; we cannot turn a blind eye. I keep saying that we can end the violence, but it requires all of us to end the violence; and that means that we each have a role to play in ending the violence. We have to intervene in what we know happens next door and we have to make a report. We will continue with our anti-gender-based violence campaign as we have to develop a mindset and practice in Jamaica that there is no excuse
for abuse.”

This inter partner domestic violence issue is like an ongoing pandemic in our society. Details are sketchy, so bear with us until we get further details.  See release which is unedited and us attached.

We share with you our valued readers this release just received tonight at about 9:55 PM local time Sunday April 11, 2021 from Minister Grange’s Ministry. Gender division on domestic violence. We have not had a chance to do any further in-depth analysis, but we got permission to release same for public consumption.

We must stem this scourge asap. It will soon consume us all.  Why folks cannot settle their issues peacefully.  Seek help when crisis occurs. Do not take to a knife or a gun or other weapon of destruction. We need to do better than that. Just too much violence.

We wholeheartedly support that,  the Minister’s position. We can do better. Just walk away. It is not an act of cowardice to do so. Instead it is the wisest thing always. Amen!

Hopeton O’Connor-Dennie is a veteran journalist who has a keen interest in social justice issues. He has international exposure.