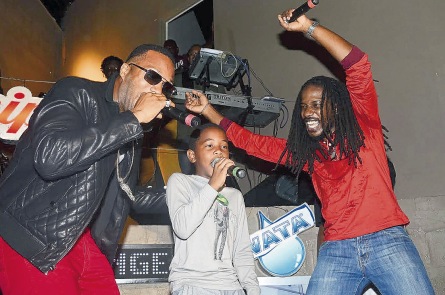 THE atmosphere inside Usain Bolt’s Tracks and Records was a celebratory one on Tuesday night. Tessanne Chin had soulfully made her way into the top 5 of NBC’s talent sing-off, The Voice.

Hours later, the Market Place venue was again ignited with the performances of dancehall artistes Agent Sasco and Chin’s brother-in-law Wayne Marshall. The two were the special guests in the weekly Behind the Screens concert series.

“All a who know say [Vybz] Kartel a one a di best lyricist of all time, let me see di hand dem in di air,” he said, before churning out the lyrics to New Millennium and Why You Doing It, collab efforts with the incarnated deejay.

Marshall later invited his wife, Tessanne Chin’s sister, Tammi, on stage. She too was well received with Over and Over Again.

Close to the end of his set, Marshall did a few songs from his upcoming album True Colours. Among them were Go Hard, a collab with Agent Sasco (Assassin) and Stupid Money, a collab with his eight-year-old son Giomar Mitchell and Sasco.

After Marshall’s exit, Sasco put in another masterful performance with tracks including Hand to Mouth, Talk How Mi Feel, Inna Di Dance, and Something Gotta Give. The track Late was among those which received numerous ‘forwards’.

For the original report go to http://www.jamaicaobserver.com/entertainment/Great-show-from-Marshall—Sasco_15578071