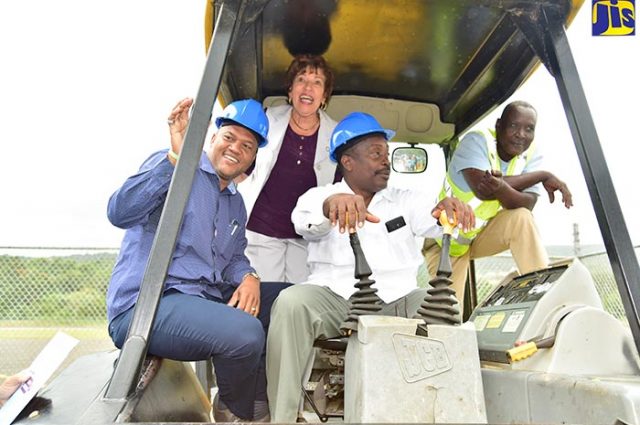 New Transport and Mining Minister, Hon. Robert Montague, on Thursday (March 29), broke ground for the expansion of the Ian Fleming International Airport (IFIA), in Boscobel, St. Mary. The Minister informed that the expansion will be done in phases and that the first is slated to cost $65 million.

“Phase 1 of the project will include widening of the runway by three metres (1.5 metres on each side), expansion of the terminal building to 1,700 square feet, the creation of a turning circle and the removal of a mound (that is an obstruction to aircraft operations) at the west end of the runway,” he said.

According to the Minister, the terminal building will be expanded westward to accommodate a better flow of passengers through the airport. He said the aim is to accommodate 90 persons per hour, which is the expected number given what is being projected for the airlines that will come in once the work is completed.

He informed that phase 1 of the expansion project is expected to be done within six months, after which phase two, which he described as “the real work,” will begin. “The Government will spend between US$20 million and US$30 million to expand the runway by an additional 700 feet up to 5,500 feet,” he said.

Mr. Montague, who is also Member of Parliament for Western St. Mary, said residents of the parish are happy for the project and have requested the Airports Authority of Jamaica (AAJ) to integrate and involve the community in the development.

“I have always said that a mile of highway can only take you a mile, but a mile of runway can take you to the world, and the people of St. Mary are aiming to go to the world,” he said. “I am encouraging the AAJ to adopt the Boscobel Primary and Basic School, because you can’t lock yourself away from the community,” he added.

For his part, Senior Director, Commercial Development and Planning, AAJ, Alfred McDonald, pointed out that the three-metre widening of the runway will take it to 30 metres, which will be able to accommodate regional jets that are expected to begin operating out of the IFIA. He said that the IFIA will be able to welcome the RJ 100 aircraft which carries 70 to 90 passengers and others of similar size, when the runway is expanded.

Mr. McDonald noted that the AAJ is having discussions with two airlines that have already indicated that they will be ready to start once the work has been finished, and pointed out that one has opted to begin flying into the Norman Manley International Airport in the interim.

He said the airlines are expected to bring passengers from new gateways to the island and that other airlines will be approached.

“We are pretty confident that new gateways in the northern and northwestern Caribbean will be opened up, and in fact, some Central and South American countries are in the offing as well,” Mr. McDonald said.