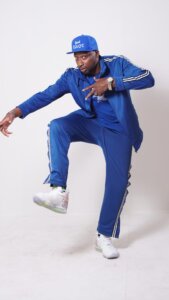 Recording artiste Gyal Ediot is bringing the energy in his recently released single, “Guh Dung.” Produced by Diet Monkey Entertainment and featured on the A2O Riddim, the track was officially released on October 15, 2022.

“This track is about dancing. It’s something that has been missing from Dancehall for a while now so I decided to bring it back in my own way,” the artiste explained.

Since its release, the track has been performing well, trending on TikTok and generating impressive stream numbers on Spotify. The accompanying music video, which hilariously showcases the artiste’s comedic abilities, has also been gaining traction on YouTube since its release on October 21.

“My hope for this track is that it will be on every radio station and I also wish for it to be #1 across the world,” the artiste expressed.

Originally known as Sarge from the comedy duo Apache Chief and Sarge, Gyal Ediot has since rebranded as a music artiste, pursuing one of his earlier passions. Currently based in Canada, he is a member of the Farrin Badniss Crew, a group of talented Dancehall artistes also based in Canada. His previous releases include “Why do Fools Fall in Love”, “Kut Dem All Off”, “Game Jus Start”, “Hold Mi” and “Daddy Rock.”

“My style of music is fun, entertaining, educational and clean. What keeps me relevant in music is the hard work and consistency I put into all my releases; the humour, my witty lyrical content and flow are what keep my fans entertained,” he highlighted.

Following this new release, the artiste has much in store for the coming months, with new music and performances in the pipeline.

“Right now I have more music and videos lined up. I already have a US tour that will be kicking off in April and multiple shows booked for 2023 in Canada and the Cayman Islands,” the artiste revealed.