Curtain rises on Chambers Bay: Some decent scores and another shocker from Tiger Woods 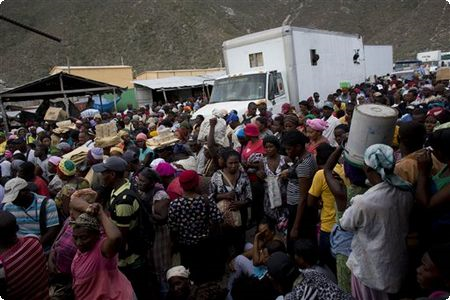 By Evens Sanon And Danica Coto

FONBAYA, Haiti _ Saint-Soi Souverin sat on a bench resting and thinking about his plight after being uprooted from his longtime home on the other side of the border in the Dominican Republic, far from the Haitian shelter where he is staying.

Dominican authorities deported the 35-year-old farm worker along with his wife and four children early this week, leaving Souverin to ponder what he will do in Haiti _ a deeply poor country that he left at age 17 to find work in the relatively more prosperous Dominican Republic.

“I’m not taking this well,” he told The Associated Press in Spanish as his small daughter fell asleep on the shelter’s concrete floor Thursday. “They sent me here with two empty hands. Everything I own was left behind.”

The Dominican Republic has long had uneasy relations with migrant workers like Souverin and it is becoming decidedly more unfriendly.

Human rights activists worry that tens of thousands of people will face Souverin’s plight in the coming weeks and months now that the Dominican government is pledging to deport non-citizens who did not submit applications to establish legal residency before Wednesday night’s deadline. Most of those affected are from neighbouring Haiti or of Haitian descent.

An estimated 460,000 Haitian migrants live in the Dominican Republic, which shares the Caribbean island of Hispaniola with Haiti. Officials have said nearly 290,000 people had enrolled in the immigration registration program, but only about 10,000 provided the required documents.

Many people had expected authorities to immediately start deporting people after the deadline passed, but the government said it would be a slow, developing process.

The repatriations are not going to be “a witch hunt,” Interior Minister Ramon Fadul said. “It will be a gradual process, as it should be, without any sudden surprises.”

But Dominican officials also warned that people should start carrying documents to prove they are legal residents, to avoid deportation in case authorities stop them.

Advocates for the migrants have criticized the registration plan as discriminatory regardless of the pace of deportations.

Dominican military officials and immigration agents have consistently raided communities with a high concentration of Haitians and detained people based on the way they look, said Wade McMullen, managing attorney for the Robert F. Kennedy Center for Justice and Human Rights in Washington.

“The Dominican Republic is shooting themselves in the foot, and it seems to be for short-term political gain,” he said in a phone interview. “Over the long term, they’re going to realize that there’s not only going to be a significant economic impact, but that the human toll is going to be even greater.”

One of those worrying about what will happen is 27-year-old Julio Mato, a moto-taxi driver who says he was born in the Dominican Republic to a Haitian mother and a Dominican father.

During an interview by phone, Mato said many people he knows are fearful of being deported, and added that he doesn’t understand why the Dominican Republic wants to chase off Haitians, who mainly work in low-wage jobs, often in construction and agriculture and as maids and gardeners.

Fadul expressed surprise at the number of people who sought to obtain legal residency, with dozens complaining they were turned away when the deadline expired at midnight Wednesday after standing in line for more than 24 hours.

“I don’t know why in recent days thousands of people have come,” he said, noting that the registration for legal residency began a year ago. “Who has brought them? Why didn’t they come before?”

The program began last June after legal challenges delayed its original launch in 2004. Non-citizens can qualify for legal residency if they can prove they have been in the Dominican Republic since before October 2011.

Souverin said he has lived in the Dominican Republic for nearly two decades and obtained an official document two years ago with help from a non-profit organization only to have it seized at the border when he returned from a quick trip to Haiti.

He also accused school officials of seizing the papers of his Dominican-born children, forcing them to quit school, echoing a common complaint among migrants.

The government implemented the registration program amid international criticism of a 2013 decision by the Dominican Supreme Court that people born in the Dominican Republic to non-citizens did not qualify for citizenship under the constitution unless they had at least one parent who was a citizen or legal resident. The ruling rendered thousands effectively stateless. Officials said they will grant citizenship to some 50,000 people in this category.

Souverin is now one of nearly 50 deported migrants staying at the shelter in Haiti, including women who are breastfeeding their babies.

He said he doesn’t know what he is going to do or how he will provide for his family.

“I don’t have a house,” Souverin said. “I lost all my resources.”