Fatalities Down 33 Per Cent 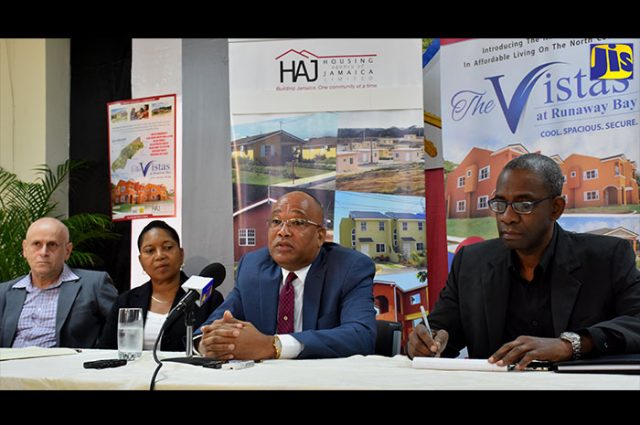 The Housing Agency of Jamaica – HAJ is moving to clarify a recent newspaper report that the agency incurred millions of dollars in losses in the current fiscal year, which ends on March 31.

Speaking at a press conference at the agency’s Caledonia Avenue offices in Kingston yesterday (March 20), Board Chairman, Norman Brown said the information was “dated and erroneous”.

He noted, however, that the agency is projecting to return a profit of $61 million at the close of the current fiscal year.

“We consider that a tremendous turnaround, by virtue of the size of the loss as against what we are reporting today,” he said. He added that the last time the agency returned a profit was in 2013.

“The preceding three years to now, we have an accumulative loss of about $2.9 billion,” he indicated.

Most of the accumulative losses resulted from the Operation PRIDE projects and other open-market activity.

Mr. Brown said there were several incomplete projects, which started under the administration of 2007-2011. “

You know, in development, once a project is incomplete, there is an oncoming recurring cost that will eat away at the viability of those projects,” he noted.

He informed that the agency has completed most of those projects and brought them to the market in a bid to reduce its operating expenses.

“We are closing the financial side of these projects… to reduce our operating expenses and to bring back a level of stability to the agency, so that we can undertake other developments and fulfil our mandate,” Mr. Brown indicated.

He informed, further, that the agency’s debt trajectory with the National Housing Trust (NHT) is moving in the right direction, with more than $410 million paid to the Trust.

“When we assumed responsibility of the agency as a Board, our debt to the National Housing Trust was approximately $3.05 billion. Presently, during the 2016/17 financial year, we have managed to reduce that debt to $2.73 billion,” he said.

In addition, Mr. Brown said the agency has reduced its budgeted operational expenses by $91 million, while carrying out the functions of the agency in an efficient and professional manner.

“There was also a report that stated that our operating expenses increased from $660 million to $1.3 billion… . Those occurred in the years March 2014 to March 2016,” he clarified.

In the meantime, Mr. Brown said several initiatives will be announced “as soon as all our regulatory permits have been granted”.

“We are an agency that has been made stable, we are profitable and we are doing the core activities that have been mandated by the Government and the shareholders of the agency,” he said.

Also, he said, over the past four years, the agency has distributed in excess of 5,000 land titles.

“We have been engaged in the distribution of titles to residents in several communities across the country. We have been having community meetings, and our target for this year is to distribute to residents between 1,500-2,000 titles,” he said.

The core mandate of the HAJ is to bring lower- to middle-income housing solutions to the public as well as to regularise informal settlements across the country.

The Board was appointed in April 2016.