Four Laws To Be Amended To Boost Tourism Sector

Justice Minister, Hon. Delroy Chuck (centre), in conversation with Head of the European Union (EU) Delegation to Jamaica, Her Excellency Malgorzata Wasilewska (left) and Canadian High Commissioner to Jamaica, Her Excellency Laurie Peters. Occasion was the opening ceremony of the 11th annual Restorative Justice Conference, at the AC Marriott Hotel, in Kingston, recently.

Permanent Secretary in the Ministry of Justice, Sancia Bennett Templer, says there has been a 90 per cent resolution and settlement rate for referral cases through the Restorative Justice process.

Mrs. Bennett Templer made the disclosure at the recently held 11th annual Restorative Justice Conference, held at the AC Marriott Hotel in Kingston.

The Permanent Secretary said restorative justice “is a tried and proven method with a high success rate”, adding that the Justice Centre has been having significant success with this method of dispute resolution.

“It is with this success rate and the importance of this programme in mind that the Ministry of Justice has been working assiduously to increase public awareness of the benefits of restorative justice,” she said.

Mrs. Bennett Templer said the Ministry will continue work to expand restorative justice offices across the island, partnering with the Judiciary, community groups and schools to increase the number of referrals to heighten the impact of this important strategy.

She argued that restorative justice fosters mutual respect and concern for community members, empowers citizens to resolve conflicts at the community level and reduces repeat offences by addressing the fundamental causes of criminal behaviour.

The Permanent Secretary further noted that it engages the public in restorative justice practices and has the advantage of reducing case backlog in the courts, thus contributing to a more efficient justice system.

Mrs. Bennett Templer said the Ministry’s strong partnerships with various local and international agencies have been invaluable in strengthening the restorative justice programme.

“A lot of what we have been able to do is because of the strong partnerships that we have. I think the partnerships also highlight the importance of justice to economic development,” she added.

The Ministry of Justice has responsibility for the overall implementation and administration of the National Restorative Justice Programme.

In her remarks, Head of the European Union Delegation to Jamaica, Her Excellency Malgorzata Wasilewska, commended the Government for implementing newer models of justice, such as mediation and restorative justice.

As a modern model of justice and lasting peace, Mrs. Wasilewska said restorative justice provides the opportunity for the Jamaican justice system to “make right a wrong through reconciliation among the offender and the victim, and the community at large, with the ultimate goal of attaining lasting peace and unity”.

For her part, Canadian High Commissioner to Jamaica, Her Excellency Laurie Peters, reiterated the Canadian Government’s commitment to assisting in the improvement of infrastructure that supports non-traditional dispute resolution mechanisms across the island.

“The utilisation of restorative justice mechanisms is part of a community-oriented approach. It is part of an approach to justice that Canada has supported through our bilateral programmes,” she said.

conferences, resulting in 80 per cent of cases being resolved or reaching a mutually agreeable result for victims and offenders.

This, he said, not only assists in case-load reduction in the court system, but also engender a culture of peaceful dispute resolution.

In the meantime, Governance Advisor, DFID, Sharon Weber, said the success of the programme, to date, is being felt across the country.

“It is an example of how donor funding can start a process in our country, which can be streamlined and embraced,” she said. 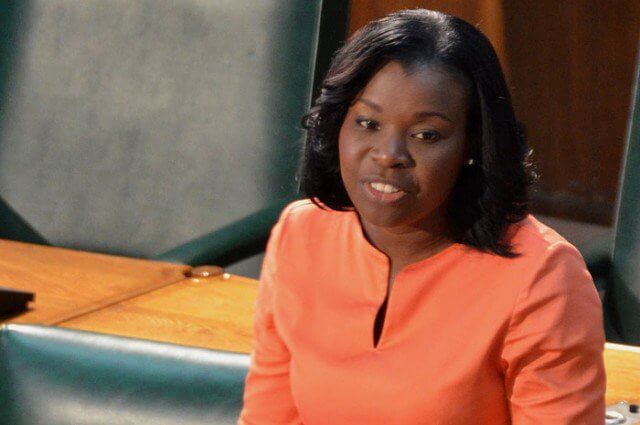