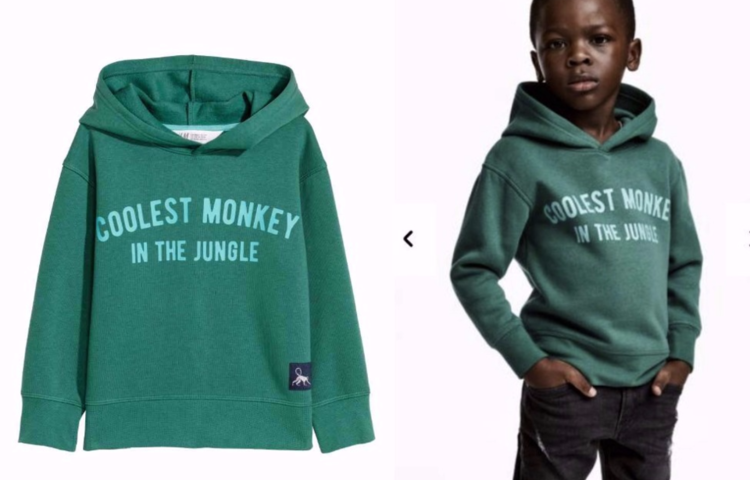 We note the trashing of stores belonging to brand being labeled as racist named H&M.  We are not surprised at this development, although we do not support violence in any shape or form this reaction is understandable under the circumstances. When emotions are assaulted there is no limit to what people will be led to do. South Africans have long unshackled themselves from racism … so any hint of same they will be tempted to crush.

South Africans were assaulted by a racist regime that allowed them … a noble people to be treated as second class citizens for years before their liberation from apartheid and installation of Nelson Mamdela as their first black president.

This international renown clothing store used an image on their hoodie that has made  black people’s blood boil over. Inscriptions like “coolest monkey in town” was bound to raise eyebrows if not revoltion. Racism in any shape or form is unacceptable. A monkey is not a human being.

“Racism is an affront to decency”. This has long been my battle cry. For any comment to ever give the slightest hint that   people of colour is of a lower class to whites is abominable. To be described as cool as a monkey is insensitive to the least. If people of colour have long rejected  the misguided notion that we should be confined to the back of the bus.  That is our place and we should be always be kept in such low station in life. We are inventors, artistes, lawyers, professors athletes and nation builders to name a few of our achievements in life.  If you accept the notion that we are good as any and better than many then being treated as unworthy to be an equal race is dumb and an affront to decency. Dr. The Honourable Usain St. Leo Bolt, president Barak Obama, Shelly-Ann Frazer-Pryce, Mohammed Allie and so many other blacks have rubbished such nonsense.

What is your colour tier …?
Who really does care …
It is our contribution to building an estate …
That will ultimately advance the human race …

Who in the end is the coolest monkey? The verdict is yours. What is your perspective? This is ours. Feel free to disagree.  We will not change our view that “Racism is an affront to decency”.

Hopeton O’Connor-Dennie is Senior International Correspondent & Photojournalist for Vision Newspaper Canada. THIS writer of colour has experienced racism up front.