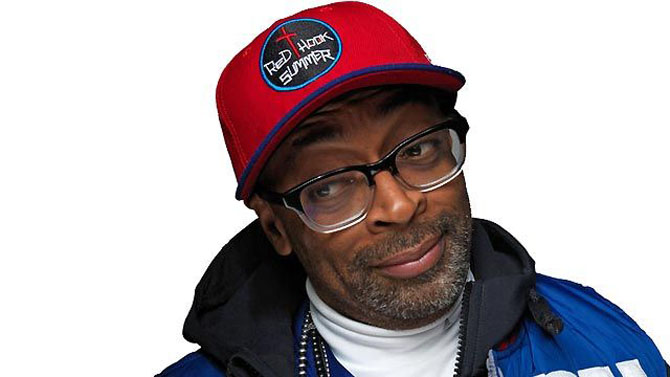 BEVERLY HILLS, Calif. _ Spike Lee gets so excited when talking about movies, he can barely sit down. Reflecting on his career as he prepares to accept an honorary Oscar, the 58-year-old suddenly stands up and bounds around as he considers various ideas, at times bellowing so exuberantly, it echoes. Lee laughs as easily as he gets serious, and says he’s profoundly touched by the film academy honour he’ll receive Saturday at the seventh annual Governors Awards.

He insisted on meeting in person for this interview, and arrived at the Academy of Motion Picture Arts and Sciences building wearing a black sweat suit, orange sneakers, a long strand of colorful beads and a beret touting the name of his latest film, “Chi-Raq.” He carried a backpack with a blocky, cartoon image of his face on it.

Lee sat down (and sometimes stood) with The Associated Press to answer six questions about his career. Responses have been edited for brevity.

AP: What was your most challenging film to make?

Lee: “She’s Gotta Have It” and “Malcolm X.” ”She’s Gotta Have it“ was my first feature and I had to raise the money myself. We shot it in 12 days. And ”Malcolm X“ was an epic, and we never had the money from the beginning to shoot it, so that’s why we had to ask prominent African-Americans to help us finish the film.

AP: What skill has proven most valuable to you in this industry?

Lee: You have to have thick skin. Because even this new film, “Chi-Raq,” we went to Sundance with the script, and everybody else said no but Amazon. And it only takes one yes. This is a tough (expletive) business, and people need to understand that. I tell that to my students, more than once, in class at NYU. You’ve got to have heart, and you’ve got to have drive. And when you get knocked down, you’ve got to pick yourself up _ put your hands up on the ropes and pull yourself to your feet. Because… if you can’t take a hit, you’re not going to last long, that’s for sure.

AP: What changes in the industry have been most surprising to you?

Lee: I’m still surprised that Hollywood and networks have not been diverse as other industries. You look at sports; look at what African Americans have done in sports _ not just on the field but in owning teams, in the front office. And I don’t want to give away some of my speech, but it’s great to have African Americans who are Oprahs an Denzels and Sam and Will, but we need to have gatekeepers. I want one studio, one TV network, cable _ who is the person of colour that has the green-light vote? That’s what I want to know. (He later noted that a black woman, Vanessa Morrison, runs Fox Animation Studios and clarified he’s talking about live action.)

AP: What is the movie experience you’d most like to forget or have done differently?

Lee: My worst experience ever, and I’ve been making films since 1986, was “Oldboy.” That is not the film _ the film Josh Brolin and I made? That didn’t make it to the theatres. And that’s the first time I’ve said this publicly. It was not a good experience.

AP: What was your most exciting Hollywood experience?

Lee: I don’t know if I could just say one. It’s going to be exciting Nov. 14 (at the Governors Awards). It was exciting back in ’82 when I won the Student Academy Award for my thesis film. … But I mean, think of all the people I’ve worked with: Five times with Denzel, a lot with Samuel L. Jackson, Wesley Snipes, Jada Pinkett. “Jungle Fever” was Halle Berry’s first film. Anthony Quinn in “Jungle Fever.” Ben Gazzara in “Summer of Sam.” Jim Brown in “He Got Game.” There’s a lot of great people I worked with. Nelson Mandela in “Malcolm X.” Angela Bassett. John Turturro _ he’s acted in my films more than anybody. Working with Prince on “Girl 6.” Working with Stevie Wonder, who did the songs on “Jungle Fever.” So I worked with great, great, great talent…

AP: You’ve been very outspoken throughout your career and gotten into some public verbal exchanges with your peers. Have any of them ever resulted in friendships afterward?