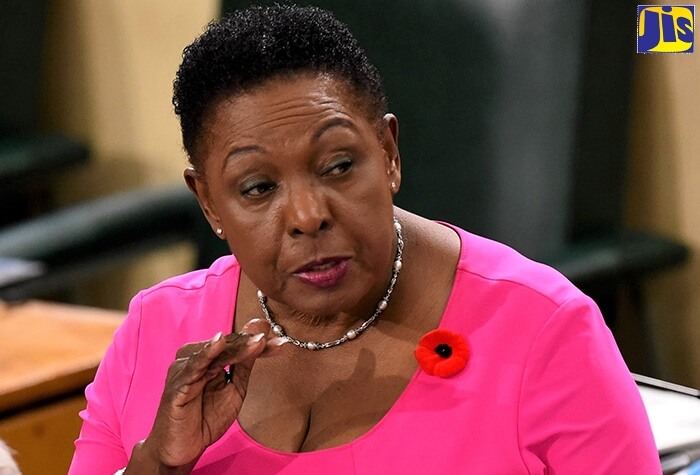 The House of Representatives, on Tuesday (November 5), approved the Report of the Joint Select Committee of Parliament appointed to complete the review of the Sexual Offences Act, the Offences against the Person Act, the Domestic Violence Act, and the Child Care and Protection Act.

In her contribution to the debate, Minister of Culture, Gender, Entertainment and Sport, Hon. Olivia Grange, said there is need for stronger laws to deal with gender-based violence, particularly sexual offences, as well as illicit acts against children, the elderly, and pregnant women.

“We have proposed amending legislation to include an aggravating sentencing factor when crimes are committed against those deemed to be most vulnerable. We have also proposed a mandatory minimum sentence of 20 years in those circumstances,” she said.

“I believe that these amendments will prove to be effective in deterring acts of violence against the most vulnerable, who have, for too long, been considered easy targets by those who would wish to prey on them,” the Minister added.

She informed that one in every four women in Jamaica has experienced physical violence by a male partner. Additionally, one in every ﬁve women reported being sexually abused before reaching age 18.

Ms. Grange pointed out that women across the country are ﬁnding ways to live with the abuse, noting that many of them are unable to leave the abusive environment because of myriad reasons.

“We can help to get them out of the abusive home and provide protection for them. We propose to increase the ﬁne for breaching a Protection Order from $10,000.00 to $500,000.00; I believe this will serve as an effective deterrent,” she argued.

“Additionally, we propose to widen the category of persons who can apply for a Protection Order on behalf of victims, to include the Minister responsible for Gender,” Ms. Grange added.

She noted, however, that some traditional beliefs militate against efforts to protect the most vulnerable.

The Minister referenced the Women’s Health Survey of 2016, which showed that 31.4 per cent of females believed that a wife is obligated to have sex with her husband, whenever he wants.

“We are moving to end that; and I am in full support of the proposal to amend the law to make it quite clear that ‘no means no’, even in a marriage,” Ms. Grange added.

She emphasised that the review of the various pieces of legislation is indicative of a signiﬁcant development also focusing on the technological implications of sexual exploitation in contemporary society.

“It indicates that social media can be used as a tool in which sexual grooming of a child can take place. It, therefore, [makes] provision for the protection of the child in the digital space,” Ms. Grange stated.

Additionally, she noted that “Predatory Sexual Assault” and “Seduction of Children under Sixteen” were also added as new offences.

The Minister advised that the Committee also recommended the establishment of a Sex Offenders Registry to facilitate a database in Jamaica, noting that “failure to register will constitute an offence, which may be punishable by imprisonment”.

She further stated that the Sexual Offences Act, the Offences against the Person Act, the Child Care and Protection Act, and the Domestic Violence (DV) Act will provide victims, particularly those deemed vulnerable, with greater protection from sexual offences and increased support from the State.

Meanwhile, Justice Minister, Hon. Delroy Chuck, who closed the debate, said Parliament will have the opportunity to debate the proposed changes to the laws.