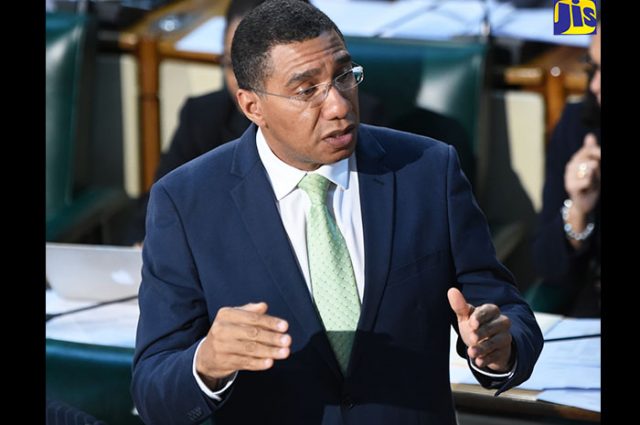 Prime Minister, the Most Hon. Andrew Holness, addressing yesterday’s (January 30) sitting of the House of Representatives.

The House of Representatives, yesterday (January 30) approved the Emergency Powers (Continuance) Resolution 2018, which will extend the State of Public Emergency in the parish of St. James until May 2, 2018.

All 51 members of the House who were present voted in favour of the motion. Eleven members were absent.

Addressing the House prior to the passage of the Resolution, Prime Minister, the Most Hon. Andrew Holness, explained that the extension is necessary, as more time is required for the security forces to carry out operations in the parish.

“It was not anticipated that all that is required would be accomplished in 14 days. It is reasonable to expect that even with extraordinary powers, it will take some time to affect the situation in St. James,” Mr. Holness said.

“The intelligence picture is being built on not only perpetrators, but also on the facilitators as well, and we will be targeting both the street-level criminal and the facilitators,” the Prime Minister added.

He noted that confidence is being built between the public and the security forces. “We need to support the security forces within the context that they will enforce the law within the provisions as we ensure a better future for our citizens. While we acknowledge that there will be some disruption and fallout, we must take back control of our country and we must dismantle the network of organised crime,” the Prime Minister said.

Mr. Holness explained that the declaration of a State of Public Emergency does not mean the suspension of the rule of law, adding that the security forces are expected and have been directed to treat citizens with respect and to protect the dignity and safety of all.

He said the rampant criminality, in particular murder, lottery scamming, trafficking and other illicit businesses, is evidence of an ecosystem of crime that is well resourced and interconnected, with broad reach in the parish of St. James through a network of facilitators, both public officials and private persons.

During the State of Public Emergency, the security forces will have the power to search, curtail operating hours of business, restrict access to places and detain persons without a warrant. It also gives them power to stop and question persons and power to seize property.

It allows them to control public gatherings and control movements.

Mr. Holness said the additional powers allow the security forces, through a suite of operations, to bring the high levels of violence and murders under control and also to prevent the movement of weapons.

“The overall government response to the criminal ecosystem has to be more sophisticated than solely direct action on criminal gangs. It must be extended beyond the JCF and the JDF to other enforcement arms of the Government whose efforts address unexplained wealth, public order in the towns, illegal construction, illicit businesses, and many other matters that affect the rule of law,” he said.

In the meantime, Mr. Holness informed that 10 guns have been retrieved, while 51 persons have been arrested and charged since the State of Public Emergency was announced and declared in St. James on January 18.

Meanwhile, Leader of the Opposition, Dr. Peter Phillips, said his side is supportive of the extension for three months.

“We accept that the peace could not be restored sufficiently in the 14 days permitted under the Constitution and that more time needs to be made available to the security forces in order for confidence in the state of civil order to be spread widely among the people of St. James,” he said.

On January 18, the Governor-General, by Proclamation, declared that a State of Public Emergency exists in the parish of St James, and further declared that the said Proclamation shall, unless previously revoked, remain in force for 14 days or for such longer period, not exceeding three months, as both Houses of Parliament may determine by a resolution, supported by a two thirds majority of all members of each House.

The Constitution provides that a period of public emergency can be declared by proclamation if the Governor-General is satisfied that action has been taken or is immediately threatened by any person or body of persons of such a nature and on so extensive a scale as to be likely to endanger public safety.

The Emergency Powers Act refers to the existence of a State of Public Emergency and empowers the Governor-General to make regulations during a period of public emergency.

The Emergency Powers Regulations, 2018, were laid in the House of Representatives on January 23, and in the Senate on January 26.