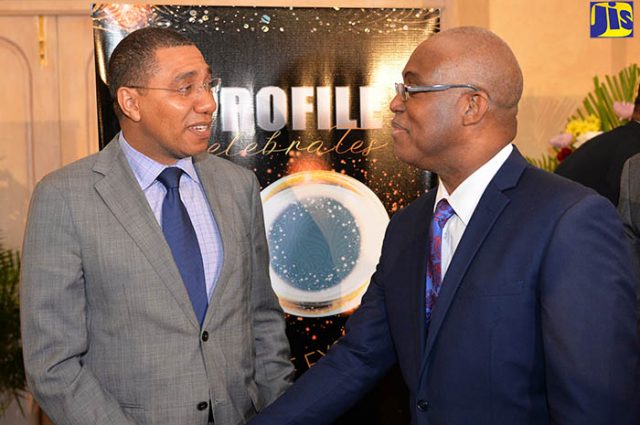 Photo: Prime Minister, the Most Hon. Andrew Holness (left), is greeted by esteemed journalist, Ian Boyne, when he arrived at King’s House on February 28 to join in the 30th anniversary celebration of Mr. Boyne’s inspirational television programme, ‘Profile’.

For the past 30 years, he has been inspiring the nation as he shares remarkable stories of adversity, stories of triumph, resilience and excellence.

Through his personality interview television programme, ‘Profile’, aired on Television Jamaica (TVJ) each Sunday, veteran journalist Ian Boyne has been captivating the attention of his audience with riveting tales of successful individuals, who have risen to the top of their fields despite incredible odds.

With his probing and incisive interview style, Mr. Boyne has skilfully unveiled the raw, real life stories of his countless guests from all spheres, who have ranged from Prime Ministers, sporting sensations, international icons, movie stars, scholars, business leaders, to ordinary Jamaicans.

Few television programmes have had the resounding impact as has Profile, which is the longest running non-seasonal show on local airwaves, and one of the longest internationally.

It has earned the reputation of being an institution that stands ably on its own, – and is a particular brand of “positive journalism” that is yet to be matched in the Jamaican media landscape.

Many are in awe of the yeoman task this media stalwart has undertaken since he was in his 20s when he set out to “make a difference in the lives of people”, as he revealed in one interview.

Among the throng of individuals whose lives have been touched by the show is Prime Minister of Jamaica, the Most Hon. Andrew Holness, who noted that Profile has had a “profound impact” on a generation, including himself, sharing that he has been an avid viewer of the programme since he began tuning in at 14 years old.

The Prime Minister said it was admirable that Profile, which he said represents “the power of good journalism”, is still going strong after 30 years, when internationally, successful programmes rarely pass 25 years.

He pointed, for example, to the Tonight Show with Johnny Carson, which ended at 30 years; and Larry King Live and the Oprah show, which both ended after 25 years.

“The longevity of this programme Sunday after Sunday… confirms that people are discerning and we can combat negative information with positive information,” he said, as he joined in the shower of accolades from well-wishers, family and friends who gathered at King’s House on Tuesday (February 28) for the 30th anniversary celebration of Profile.

The Prime Minister further noted that Mr. Boyne, who is also host of Religious Hardtalk on TVJ, stands on his own as “a world leader in your class”.

“You are a national asset and we are very proud of your work, and Jamaica is the better off for having you,” Mr. Holness said.

Adding her words of admiration, Leader of the Opposition, the Most Hon. Portia Simpson Miller, thanked Mr. Boyne for consistently pursuing wholesome and constructive journalism that has been contributing immensely to nation building.

“Ian Boyne has opened and explored the pages of many interesting human books, and the Jamaican public have been avid readers of his stories of inspiration, challenges and triumphs for all of 30 years. This is a remarkable achievement in media, in public discourse and in the life of our nation,” she said.

Mrs. Simpson Miller, also a guest on Profile, was among four former Prime Ministers who came out to celebrate with Mr. Boyne. The others are the Most Hon. P.J. Patterson, Hon. Bruce Golding, and the Most Hon. Edward Seaga, who have all been Profile guests.

Also showing his support was one of the country’s most prominent businessmen, Chairman of Sandals and the Jamaica Observer, Gordon “Butch” Stewart, who has had the most appearances on the show.

Business tycoon and former Profile guest, Michael Lee-Chin, who was the keynote speaker, said it is no easy feat to remain at the top of one’s field for 30 years.

He noted, however, that Boyne, who embodies all the characteristics of an exceptional leader, had the right recipe for success with the three main ingredients of integrity, intelligence and passion.

“Ian, thank you very much for the leadership of distinction that you have provided to us here in Jamaica…. . May you have another infinite number of years to maintain and further your passionate work,” he said.

Special Advisor to the Governor-General, Ambassador the Hon. Burchell Whiteman, and General Manager of TVJ, Claire Grant, also gave glowing tributes. Obstetrician and gynaecologist, and comedian, Dr. Michael Abrahams, with his witty piece entitled ‘The Profile of a Profiling Profiler’, emitted peals of roaring laughter, the loudest of which came from Mr. Boyne.

In his response, the man of the moment commented that it was “an honour to be eulogised before one’s death”, and pointed out that the work of Profile is important “because culture matters, inspiration matters”. 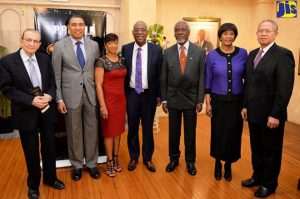 He noted that while journalism has the job to “ferret out corruption and to speak truth to power”, he also strongly believes that media has a developmental role to play – to empower people.

“The media must inspire, the media must strengthen people’s confidence in their capacity to make a difference – that has been my commitment,” he said.

“I am doing my part, and it is a part that all of us must do – the inspiration continues,” Mr. Boyne said.

Also host of the Jamaica Information Services’ (JIS) flagship interview programme, Issues and Answers, Mr. Boyne thanked all who have supported him throughout the years, which allowed him to “keep on going at this task of excellence”.

He specifically mentioned the unwavering support of his “biggest fan”, his wife, Margaret; his children; his extended TVJ, JIS and church families as well as the backing of his sponsors – Jamaica

All who have come to know this respected media practitioner, whether personally or professionally, are aware of how driven and passionate he is in maintaining his hallmark of excellence, since entering the profession in 1975.

This was duly recognised by the Government, when in 2009, he was conferred with the Commander of the Order of Distinction (CD) for his outstanding contribution to journalism.

Mr. Boyne is also the Deputy CEO of JIS, a Minister of Religion, author, and a columnist for the Sunday Gleaner.

What started as a dream for Mr. Boyne, Profile is now a staple, much-loved programme reflecting three decades of journalistic prowess.

Not one to entertain complacency, Mr. Boyne told a Jamaica Observer interviewer that he intends to surpass the longest-running interview show worldwide, which is a Japanese programme that ran continuously for 39 years. “I aim to achieve that 40-year milestone,” he said.

With no signs of slowing down after 42 years in media, a still-passionate Ian Boyne is sure to continue his legacy of positivity, motivation and change.