Ice Cube Video Discusses his Interactions with Both Parties

LOS ANGELES, Oct. 11, 2020 /PRNewswire/ — Fresh off working with Governor Gavin Newsom on the passage and signing of AB3121 and joining him for the historic bill signing, Ice Cube reveals his discussions and thoughts following conversations with both Presidential campaigns in his latest video.

Below are highlights from a Contract with Black America: 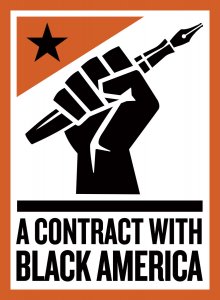 As citizens and lawmakers both, we are joining to demand the Contract with Black America be addressed immediately to finally create the “more perfect union” all Americans deserve.  As such, it is time for a complete paradigm shift in how we run our institutions and operate our country.  The problems facing America are too deep and wide to simply reform one area or another. Long-lasting solutions demand a comprehensive thorough “rethink” of America so that each new approach in each area supports the success of the others. This Contract with Black America will provide conceptual approaches in several areas.

Darrick Hamilton, in the Preface to the Contract, says “This Contract with Black America strikes at the heart of racism and presents a blueprint to achieve racial economic justice.  It was written in the backdrop of the killing of George Floyd, which set off a wave of     protests not seen since the Civil Rights Era of the 1950’s and ’60’s, and a global pandemic in which the Black mortality rate is more than double the White rate and in which 45% (nearly half) of Black-owned businesses closed. That the impact of something presumably random, such as a pandemic, however catastrophic, can be so linked to one’s racial identity is highly problematic – and further evidence that, as a nation, we are failing miserably. This links to a larger political and economic vulnerability, whether we’re in a pandemic or not: the immoral devaluation of Black lives has been ingrained in America’s political economy and is long overdue for a reckoning.  This Contract with Black America is a patriotic pathway to promote our shared prosperity and achieve racial economic justice.”  Ambassador Andrew Young is equally supportive.  “The Pandemic has revealed to us the importance of the essential worker of which many are minorities.  We can grow no stronger without improving the sustainability of those at the bottom of the economic pyramid.  The Contract for Black America is a comprehensive step toward an action plan that addresses the future stability of minorities and essential workers across the nation.”

To address racial inequality, after reading the Contract with Black America, we the undersigned agree to support and demand an open debate and a clear and fair vote within the first 100 days of the 117th Congress in 2021 on the following proposals to be codified into specific bills: