Williams leads stacked field at Rogers Cup, as Bouchard tries to get game back 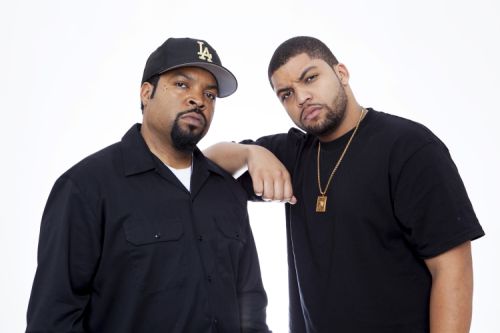 LOS ANGELES _ O’Shea Jackson, Jr. was determined to play his father, Ice Cube, in “Straight Outta Compton.” Not only does the 23-year-old look uncannily like his dad, but he’s got the rapper-turned-movie star’s mannerisms and expressions down _ something he used to his advantage during the two-year audition process.

“I’d go around frowning for no reason,” Jackson recalls with a warm smile.

Jackson Jr. makes his acting debut in “Straight Outta Compton,” opening Aug. 14. The film captures the rise and rupture of N.W.A., the group credited with starting gangster rap and inspiring warning labels on album covers for its provocative, incendiary lyrics. Founding members Ice Cube and Dr. Dre are among the film’s producers.

Father and son sat side by side to talk with The Associated Press about bringing Ice Cube to life on screen.

The remarks have been edited for clarity and brevity.

AP: What’s it like seeing your story told by your son?

Ice Cube: I’m proud on a thousand different levels. You always want your kids to step up at the moment of truth, and he did more than step up. He just owned it. I’m just proud of the production. I’m proud of the movie. I’m proud of the group. I have never been this happy for any project that I’ve ever done.

AP: Kids often think their parents are dorky in some way. Did you discover anything like that in portraying your dad as a teenager?

O’Shea Jackson, Jr.: The only thing that would be remote to that would be the lingo of the ’80s, just the things that they said that were ‘in’…. No pun intended: Ice Cube’s the coolest dad.

AP: Was there anything you didn’t want your son to know about you?

Cube: Seeing my son getting roughed up by the police is not fun. It brings back memories of when I got roughed up by them. He grew up totally different than how I grew up, and to me, he shouldn’t have to go through that. But in a movie like this, and to understand really what we all went through, I’m glad that he did feel the tone of what we went through so he could understand it a lot more. He was able to do it in a controlled environment, and not really have these police put their hands on him, because that would hurt me if they did that for real.

AP: How was it rapping your dad’s words, and Cube, how was it watching him do it?

Jackson: I’ve been seeing him rap these words forever, you know? So it’s cool to finally be on the other side of that. To have been looking at his movements and then getting them down. I had the time of my life.

Cube: We first took him on tour, me and my wife, when he was 1 1/2… So he’s been around movies and music his whole life… Then at 18, he started to really perform with me. So he has a knack for the stage. I’ve seen him rap my songs before on stage, with me. So to see him do this on the big screen, it was great. I wasn’t surprised that he was so good, because I knew how good he was.

AP: Cube, would you ever write an autobiography?

Cube: I don’t know. I think I have so much to do. I don’t want to have like volume one, volume two. I just feel like I got a whole lot of living to do before I think about summing it up in a book.

AP: What’s next for you?

Jackson: I’m working on my autobiography (laughs). I’m definitely ready to get my foot in as far as the cinema, definitely trying to get my acting career off the ground. I want to wait until “Straight Outta Compton” is well in everyone’s minds and see where we go from there.