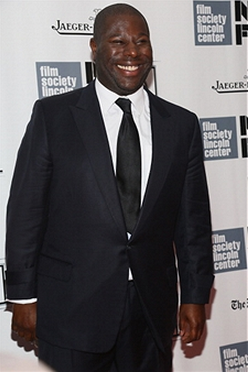 Yesterday, The Source Magazine was on the red carpet for the New York Film Festival premiere of Fox Searchlight’s “12 Years A Slave” out Oct. 18.

Based on an incredible true story of one man’s fight for survival and freedom.  In the pre-Civil War United States, Solomon Northup (Chiwetel Ejiofor), a free black man from upstate New York, is abducted and sold into slavery.  Facing cruelty (personified by a malevolent slave owner, portrayed by Michael Fassbender) as well as unexpected kindnesses, Solomon struggles not only to stay alive, but to retain his dignity.  In the twelfth year of his unforgettable odyssey, Solomon’s chance meeting with a Canadian abolitionist (Brad Pitt) forever alters his life.

Check out our exclusive interview with the film’s director Steve McQueen.

Q: What is it about Solomon Northup’s story that’s so inspiring to you?

McQueen: I just think that the idea that someone held on to love was really powerful to me…that his spirit and him holding on to love.

Q: What was it about Chiwetel that made him so perfect for the role?

McQueen: Well I think…he reminds me of  Harry Belafonte–Sidney Poitier, that kind of stature, that kind of gentleness about them and that’s what I needed for this character. Some kind of standing really.

Q: Can you talk about the experience of filming the movie with the cast and the crew that you assembled?

McQueen: That was amazing. What was so interesting about that was that I think how it all came together…you see a jigsaw puzzle, it’s scattered all over the floor and somehow, wonderfully, slowly, it each gets…an image evolves and that was the wonderful thing about it.

Q: Was there any scene in particular that you feel impacted you the most?

McQueen: The one…I think when Solomon reacts to Patsey when she looks at him when she had just been…when people are tending her wounds and obviously…Solomon’s reaction…that really…yeah I felt that.

For the original report go to http://thesource.com/2013/10/09/interview-with-12-years-a-slave-director-steve-mcqueen-at-nyff-premiere/