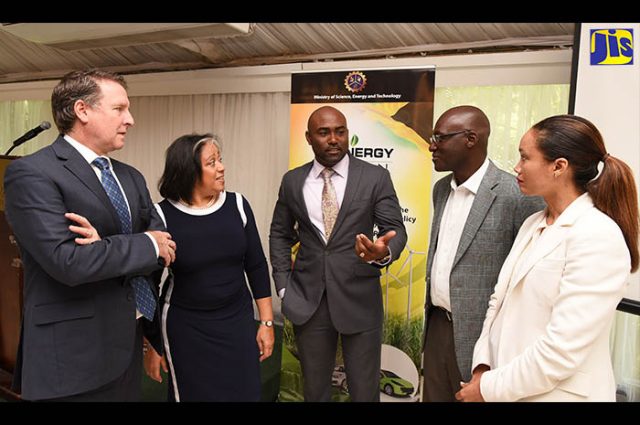 Minister of Energy, Science and Technology, Dr. the Hon. Andrew Wheatley (centre) shares in conversation with from left: Senior Energy Specialist at the World Bank, Mark Lambrides; Permanent Secretary in the Ministry of Science, Energy and Technology, Hilary Alexander; Principal Director of Energy in the Ministry, Fitzroy Vidal; and the Ministry’s Chief Technical Director, Michelle Forbes. They were at the Energy Security and Efficiency Enhancement Project (ESEEP) workshop, at the Terra Nova All Suite Hotel in St Andrew, on April 20.

Science, Energy and Technology Minister, Dr. the Hon. Andrew Wheatley, says a special component of the Integrated Resource Plan (IRP), which will be completed in a few weeks, will include hydropower as an alternate source of renewable energy

Dr. Wheatley acknowledged that wind and solar power have already gathered significant interest as sources of renewable energy, but more emphasis is needed on hydropower.

Out of a recently concluded feasibility study, 11 potential hydropower facilities have been identified that will be built out to contribute some 30 megawatts of power to the national grid.

“We have to ensure that we continue the drive to diversify our energy sector. We are known to be the land of wood and water and sun but we do not put in enough effort in capitalising on the potential of hydropower,” he said.

Dr. Wheatley was addressing stakeholders at a workshop to showcase the outcomes and achievements for the concluded Energy Security and Efficiency Enhancement Project (ESEEP), at the Terra Nova All Suite Hotel, on April 20.

The IRP is a comprehensive decision support tool and road map for meeting Jamaica’s electricity grid objectives over the next 20 years.

It will determine the generation capacity and technologies to be used to satisfy the demand over this period; and to establish agreements on the transmission and distribution infrastructure to generate and deliver the needed electricity and the resulting tariffs.

ESEEP, which was funded by the World Bank in the sum of US$15 million, ended on October 31, 2017 and had as its objective of increasing energy efficiency and security through the implementation of the country’s National Energy Policy (NEP).

It comprised three components, one of which included: strengthening the regulatory and institutional framework to improve sector performance, increase private investment and transition to cleaner fuels.

Dr. Wheatley expressed pleasure to see the numerous achievements of ESEEP, a few of which included: the development of the Bureau of standards of Jamaica Energy Efficiency Laboratory, as well as the completion of the National Petroleum Codes.

Launched by the Bureau of Standards Jamaica (BSJ) on November 30, the codes address areas such as product handling, and occupational as well as health and safety requirements.

“These codes are critical for regulating the petroleum industry. We have made quite a number of advances as it relates to the regularisation of the petroleum sector,” Dr. Wheatley said.

Former Project Manager of ESEEP and a current Consultant with the World Bank, Judy Marshall Anderson said the workshop was necessary to bring together stakeholders within the energy industry to highlight the achievements of ESEEP.