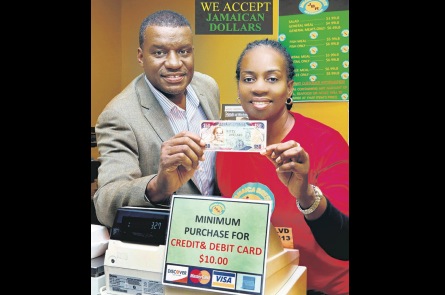 SINCE opening the Jamaica Breeze restaurant in Queens, New York in June, Michael Duncan says he has received strong support from the Jamaican community.

Tomorrow when patrons show up at the self-serve eatery, they get an opportunity to show patriotism through a novel concept.

They will be able to purchase items using Jamaican currency. The funds will then be used to buy American dollars with 10 per cent of the take donated to a Jamaican charity.

“I have been playing with the idea for about six months, speaking with friends and families to get their ideas on the concept,” Duncan told the Sunday Observer. “Most were very positive and thought it was a great idea. So, I decided two months ago to start it in December.”

He says seeing Jamaicans returning to the US with wads of Jamaican cash influenced his decision to accept money that would otherwise be stashed in “handbags, wallets and closets”.

The system, he points out, has worked in other countries. Businesses close to the Canadian and Mexican borders accept payment in Canadian dollars and Mexican pesos.

In New York, use of foreign currency is permissible once business owners pay the New York sales tax on every dollar.

Duncan, 50, grew up in the Shortwood area of St Andrew. He migrated to the United States in 1978 and previously served as chief of staff for the New York City Council’s 31st District.

The Shortwood Practising School will be the first beneficiary of the Jamaica Breeze initiative, which Duncan hopes will have an extended run.

“This project will last as long as there is a demand for it. As long as Jamaicans are travelling back and forth, and bringing back Jamaican dollars,” he said.

For the original report go to http://www.jamaicaobserver.com/entertainment/JA-dough-hits-home_15595796