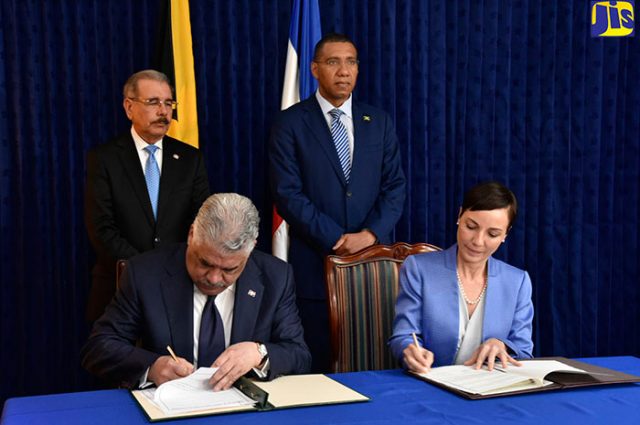 Prime Minister, the Most Hon. Andrew Holness (right); and President of the Dominican Republic, His Excellency Danilo Medina Sánchez (left), observe as Minister of Foreign Affairs and Foreign Trade, Senator the Hon. Kamina Johnson Smith (second right); and her Dominican Republic counterpart, Miguel Vargas, shake hands after signing a Memorandum of Understanding (MOU) aimed at facilitating closer relations between the countries. The signing took place during a joint press briefing held at the Office of the Prime Minister today (November 27) after a bilateral meeting between Prime Minister Holness and President Medina.

Jamaica and the Dominican Republic will be increasing collaboration in tourism, trade, sports, culture, and education, among other areas, with the aim of bringing tangible benefits to both countries and the wider region.

This followed a meeting between Prime Minister, the Most Hon. Andrew Holness, and President of the Dominican Republic, His Excellency Danilo Medina Sánchez, where they discussed a range of bilateral, regional and multilateral issues.

President Medina arrived in the island today (November 27) for a one-day State Visit.

At a joint press briefing held at the Office of the Prime Minister after the discussions, Prime Minister Holness, said that both countries have similar goals, which could be facilitated through cooperation and strengthening of alliances.

He cited tourism as one area where closer ties will be forged. “We both agreed that the tourism sector has (grown) considerably in Latin America, and especially in the Caribbean. For this reason, the time has come to join forces, so that the fruits of this growth are distributed more and more in a fair and sustainable way among Caribbean people as a whole,” he said.

Mr. Holness said that both countries are to sign a memorandum of understanding (MOU) to promote multi-destination tourism. “We agreed that we will negotiate a new air services agreement, which will complement the MOU,” he noted further.

Prime Minister Holness said the leaders also agreed to establish a joint bilateral commission to enable broader cooperation in the areas of sport, culture, education, and other matters of mutual interest.

“Jamaica and the Dominican Republic have mutual interests in strengthening trade and investment relationships with the aim of creating more opportunities for employment and income generation in both countries,” he added.

Prime Minister Holness and President Medina also discussed the need for the Caribbean to have a single voice in fora such as the One Planet Summit on climate Change to be held in Paris France on December 12.

He said it is important that the world know the difficulties Caribbean islands are experiencing from the increase in and intensity of natural disasters.

Meanwhile, His Excellency Danilo Medina Sánchez said the time has come to launch “a new era of win-win cooperation to take tangible benefits to our people in a just and solidary manner. We are two nations that, unfortunately, face vulnerability caused by climate change, and in which large sections of the populations still live in poverty vulnerability”.

“But, we are also two countries with very promising economies, with developments that present the opportunities to overcome these challenges and take care of the needs of our people,” he added.

President Medina noted that tourism has grown considerably in Latin America and throughout the Caribbean, adding that the moment has come to bring “our efforts together, so that the product, the fruit, the result of this growth will be distributed in a fair and sustainable way amongst all societies of the Caribbean”.

The Dominican Republic President said that Jamaica is a great and important trade partner, from which his country has a lot to learn.

“You are the regional leader in such aspects that are key to competiveness, such as the time it takes to incorporate. On our hand, we are also very interested in sharing our best practices and (to) cooperate with the people of Jamaica in whatever interest you may have,” he said.

Danilo Medina Sánchez is the Dominican Republic’s 53rd President. He has been in office since 2012.

At the end of the State Visit, President Medina will depart Kingston for Montego Bay where he will participate in the United Nations World Tourism Organization conference from November 27 to 29 at the Montego Bay Convention Centre.