Jamaica has Benefited from Being Part of the Commonwealth – Charles Jr. 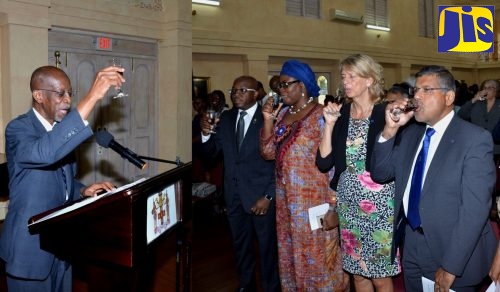 State Minister for Foreign Affairs and Foreign Trade, Senator the Hon. Pearnel Charles Jr., says that since Jamaica became a member of the Commonwealth in 1962, the nation has benefited from fruitful cooperation in a number of areas.

“Jamaica is grateful for the support provided over the years, which has contributed greatly to the country’s path towards inclusive and sustainable development,” he said, while addressing a Commonwealth Day celebration at King’s House on Monday (March 11).

He noted that the Commonwealth’s Climate Finance Access Hub “is ensuring that Jamaica and other small States are climate finance ready by building our capacity to bid for pledged climate funds in support of greater resilience.”

“This is particularly important for us as a small island developing State, given that climate change persistently threatens our development and even our existence,” Senator Charles Jr. added.

He said that the annual Commonwealth Day observance serves as a reminder of the greatness that can emerge from cooperation, “particularly for us countries, which committed 70 years ago to remain united as free and equal members of the Commonwealth of Nations, freely cooperating in the pursuit of peace, liberty and progress”.

“We welcome this year’s theme for Commonwealth Day, ‘A Connected Commonwealth’, as it calls on us all to harness our dynamism and potential to leverage traditional commonalities into new and innovative means of working together,” he said.

“We must work together to strengthen relations and synergise activities in key areas for the benefit of all our countries and people,” he added.

The Foreign Affairs State Minister called on all Jamaicans, particularly the youth, to continue to engage with the Commonwealth and to avail themselves of the opportunities to participate in, and to promote the work of the organisation.

He noted the opportunity for young people to apply and take part in programmes such as the Commonwealth Youth Council and the Queen’s Young Leaders Programme.

“I also call on the Commonwealth Secretariat to increase its efforts to engage with all its members, and this must be done towards a better future for our countries and our people for successive generations,” Mr. Charles Jr. said.

Since 1977, Commonwealth Day has been celebrated annually on the second Monday in March.

The 53 Commonwealth countries in Africa, Asia, the Caribbean and Americas, the Pacific and Europe, marked the day with a range of activities, such as faith and civic gatherings, school assemblies, flag-raising ceremonies, street parties and cultural events.