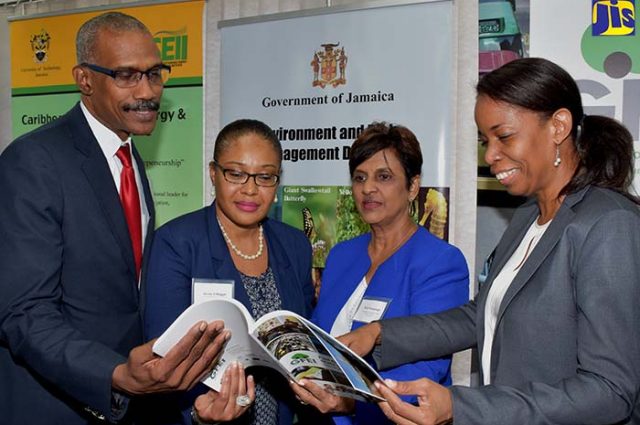 This is expected to improve the overall environmental and human health in the country.

Ms. Romero was speaking via video-conferencing platform, Skype, at a national stakeholders meeting for the UNEP-Global Fuel Economy Initiative (GFEI) Jamaica Project at the Half-Way Tree Road offices of the Ministry of Economic Growth and Job Creation on Wednesday (April 4).

Established in 2009, the GFEI assists governments and transport stakeholders with promoting cleaner and more efficient fuels. Its main objective is to stabilise emissions from the transportation sector by improving the fuel economy of global lightweight-duty vehicles (LDVs) by 50 per cent by 2050.

Jamaica is the only country in the Caribbean with an active GFEI project, which is now in its second phase.

Since its launch in 2015, the project has produced a report on fuel economy trends in Jamaica, which shows that motor-vehicle emissions have been decreasing over the years.

According to Project Manager, Dr. Ruth Potopsingh, the reduction in motor-vehicle emissions has not occurred as rapidly as would have been desired; however, the country has made steady strides in strengthening fuel quality standards and promoting more fuel-efficient vehicles.

She pointed to, for example, the “forward thinking” Motor Vehicle Import Policy, which speaks to the age restriction of imported vehicles, “which means that the likelihood of having cleaner vehicles is greater”.

“We have fuel octane, and we have ultra-low sulphur (fuel), which puts Jamaica at the cutting edge, more or less, for the region, because not many of the countries in the region have been using ultra-low fuel,” she pointed out.

The Project Manager also mentioned the revised Motor Vehicle Emissions Standards for Jamaica, which is to be promulgated under the Road Traffic Act; the Petroleum (Quality Control) Act (1990), which provides for fuel specification, including sulphur content of fuels; and the Air Quality Regulations of the Natural Resources Conservation Authority (NRCA).

In the meantime, Chief Technical Director in the Economic Growth Ministry, Lt. Colonel Oral Khan, said the Government continues its work on overall air quality management and is actively working on a national programme to facilitate improved air quality islandwide.

This, he said, is being achieved through the development of the draft emissions policy framework for Jamaica, which addresses the subject of emissions in relation to air quality and climate-change mitigation.

Lt. Colonel Khan said Jamaica’s adoption of the GFEI is helping to advance this work.

Over the past two years under the project, thousands of data sets on Jamaica’s motor-vehicle fleet have been gathered, which are now being processed and will help to inform policy direction.

The project is at the stage of national stakeholder consultations that aim to develop proposals for policy and legislation to support actions at the national level for the mitigation of greenhouse gas emissions in the road transport sector.