Remarks delivered by the Honourable Olivia Grange, Minister of Culture, Gender, Entertainment and Sport at the Floral Tribute in honour of Sir Alexander Bustamante 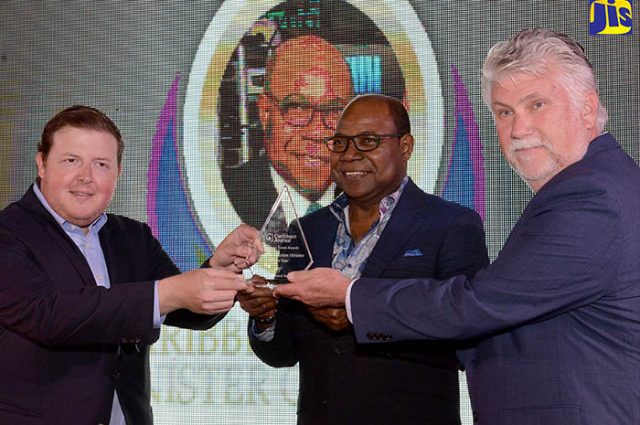 Minister of Tourism, Hon. Edmund Bartlett (centre), accepts the 2017 Caribbean Tourism Minister of the Year award from Editor-in-Chief and Co-Founder of Caribbean Journal, Alexander Britell (left), and Vice President and Managing Editor of the Journal, Guy Britton, at a reception held at the Terra Nova Hotel, in St. Andrew on February 24.

Minister of Tourism, Hon. Edmund Bartlett is reporting that Jamaica recorded increased visitor arrivals to the island, for the first two months of the year.

“We ended January at 12 per cent over last year, and February is still going ahead of last year,” the Minister said, while speaking at a cocktail reception held at the Terra Nova Hotel on February 24.

The reception was hosted by the Jamaica Tourist Board (JTB) in celebration of Minister Bartlett being named ‘Caribbean Tourism Minster of the Year’ 2017, by the Caribbean Journal.

Data from the Jamaica Tourist Board (JTB) showed that a record 4.3 million tourists visited Jamaica in 2017, providing a revenue flow of approximately US$3 billion.

“Things are looking better, because we are on the road, and we are talking to our partners, and they are understanding that what we are doing is to maintain Jamaica as a safe, secure and seamless destination,” he added.

Meanwhile, Mr Bartlett said that the tourism industry is a “significant driver” of Jamaica’s economy, noting that it has been the fastest growing sector, and the largest contributor to global Gross Domestic Product (GDP), over the last 10 years.

“Tourism today has become a mammoth industry, that has embraced more than 79 countries,” he stated.

Reiterating that Jamaica will welcome five million visitors to the island by 2019, Mr Bartlett said there are more opportunities for higher levels of production, growth, employment, and a higher level of visibility of the Jamaican economy within the Caribbean space.