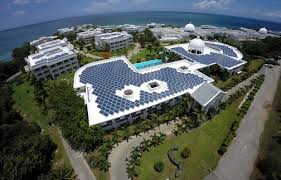 KINGSTON, Jamaica _ Sun-splashed Jamaica is positioning itself to nearly double the amount of electricity it generates from renewable sources.

Two new wind installations and a solar energy project with 98,000 panels are expected to add 80MW of electricity to the Caribbean island’s grid. The total investments are worth roughly $200 million.

Albert Gordon is director of Jamaica‘s utility regulator. He says the country should derive 11 per cent of its power from renewable sources when the projects come on line in 2016. Renewables make up 6 per cent now.

Soaring power costs and a dependence on imported fuel have long been major problems in Jamaica. Consumers pay a whopping 42 cents per kilowatt hour.