Hansle’s Gold, One of the Sweetest Victories

Since her introduction, recording artiste Lavisch under the stewardship of prominent producer/promoter Luigi Society has been making waves throughout the Jamaican music industry to even as far as West Africa. The young artiste whose sound is as cool as the rivers that runneth across the hills and valleys of Jamaica flows just the same, caressing varying melodies on catchy instrumentals. 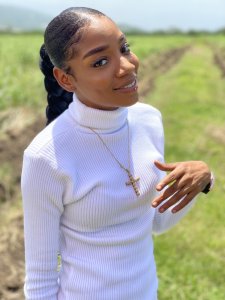 The young act who chases big dreams like many before her, give thanks continuously as she remains focused. Her journey to which she alludes has been long, sees the fairly new act gaining momentum, which has led to the release of her debut EP titled “Vision”. The ‘Better Days’ artiste debut EP since its release on July 30th has managed to amass almost 250,000 streams across digital platforms and continues to gain momentum as it secures various chart placements.

Since its release, the EP has peaked at #5 in Austria; #101 on the United Kingdom; and #56 in Kenya on the iTunes reggae charts. The 11-Track EP which is supported with features from acclaimed producer/artiste Noah Powa, Blvk H3ro, Zagga, and Epixode is currently the 2021 reggae/dancehall artiste in Ghana. “I want to really thank all the producers, artists & my team; Luigi Society & Bridgeview Productions for believing in me when no one else have” states Lavisch as she continues to promote her EP globally. 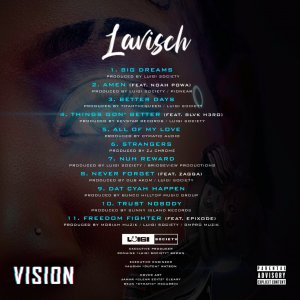 Prior to Lavisch debut release, the artiste also managed to secure a recording contract with Bridgeview Productions based in The United States, and also represent the act outside of Jamaica. The album is available on digital platforms and is distributed by Hapilos Music Group.