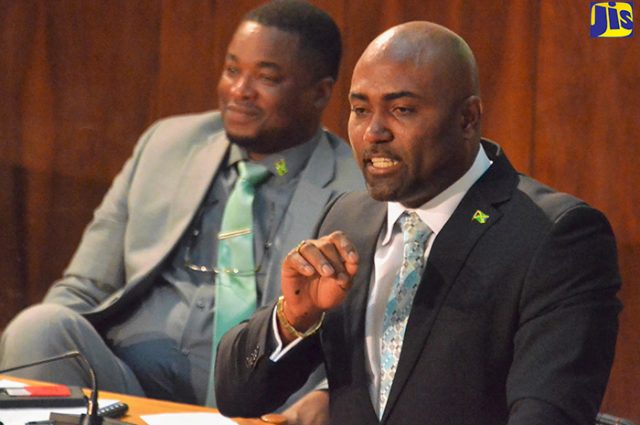 Photo: Minister of Science, Energy and Technology, Dr. the Hon. Andrew Wheatley, speaking in the 2017/18 Sectoral Debate in the House of Representatives, yesterday (April 18). Seated (at left) is Member of Parliament for St. James Central, Heroy Clarke.

More Jamaicans are to benefit from free Wi-Fi access at four additional locations across three parishes under the USFConnectJA project.

These are to be located at St. William Grant Park and Olympic Way in Kingston and St. Andrew; Junction in St. Elizabeth; and Mandeville in Manchester.

This was announced by Minister of Science, Energy and Technology, Dr. the Hon. Andrew Wheatley, during his contribution to the 2017/18 Sectoral Debate in the House of Representatives, today (April 18).

USFConnectJA was launched late last year by the Universal Service Fund (USF) in an effort to provide greater and easier access to broadband Internet service for all citizens across the island.

Dr. Wheatley said the initiative is expected to fuel the Government’s plan of creating a knowledge-based society by removing any barrier that currently exists for citizens who may be unable to afford connectivity.

Public Wi-Fi networks have already been installed at two locations in the Corporate Area – Devon House and Mandela Park – at a cost of more than $4 million.

In the meantime, Dr. Wheatley informed that during the last financial year, a total of 47 broadband connections were completed at a cost of $52 million.

This brings the total number of completed broadband connections, as at March 31, 2017, to 430.