Jamaicans Encouraged To Invest In Country 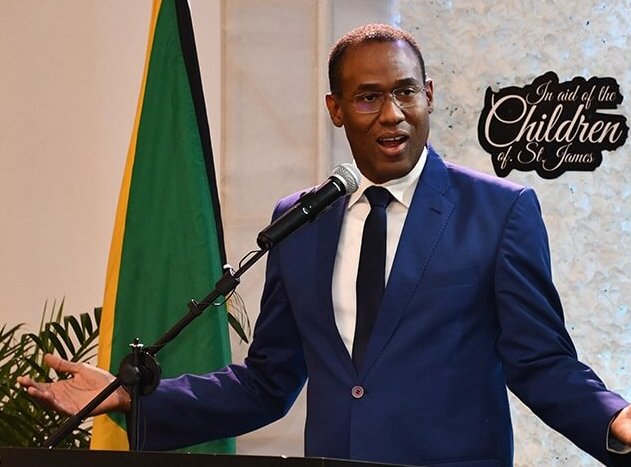 Minister of Finance and the Public Service, Dr. the Hon. Nigel Clarke, delivers the keynote address during the third annual Mayor’s Charity Ball, which was held at the S Hotel in St. James on Saturday (December 7).

Minister of Finance and the Public Service, Dr. the Hon. Nigel Clarke, is encouraging citizens to take full advantage of the “unprecedented” period of economic growth by investing in the country.

“Now is the time to ensure that you invest in Jamaica. It is a time not to be missed, it is an opportunity that we have not had before, and there is a transformation that is occurring and those who pay attention and take advantage of opportunities, in a few years will be the ones who are ahead,” he said.

Dr. Clarke was speaking at the third annual Mayor’s Charity Ball, which was held at the S Hotel in Montego Bay, St. James, on Saturday (December 7).

The Minister outlined that the island is experiencing an “incredible period of economic opportunity, and never before have the major macro variables been aligned in the way they are today”.

He noted that the unemployment rate, which is the lowest in 57 years, coupled with 19 consecutive quarters of economic growth and low and stable inflation, are among the contributing factors to the current upswing in the economy.

The Minister also cited the privatisation of a number of entities as among a number of initiatives that gives citizens an opportunity for economic freedom.

Meanwhile, the Minister congratulated Mayor of Montego Bay, Councillor Homer Davis, for staging the charity ball for a third year to raise money for good causes.

“It is very impressive the amount of persons who have benefited,” he noted.

The Mayor, for his part, thanked guests for their support. He said that proceeds from the event since its inception have allowed the St. James Municipal Corporation to aid several needy persons across the parish.

“Through the Mayor’s Charity Ball, along with support from the many valued sponsors and the charitable citizens of Jamaica, we have been able to reach out, in a very tangible way, to our children, the elderly, the shut-ins, the residents of the St. James Infirmary and other vulnerable groups,” he noted.

Among the attendees at the ball were Minister of National Security, Hon. Dr. Horace Chang; Custos of St. James, Bishop the Hon. Conrad Pitkin; and Chairman of the Tourism Enhancement Fund (TEF), Godfrey Dyer.

More than 400 guests were in attendance at the event.