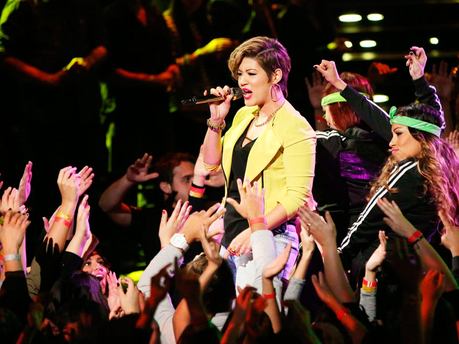 Jamaicans seem to find a way to make a party of everything. NBC’s The Voice gave Jamaicans and fans of the country an excuse to do so last night.

Days before Tessanne performed, tweets, email blasts, and hard-copy invitations began circulating like wildfire. Not just in Jamaica, but all over the United States.

At the Jamaica Breeze restaurant, in Queens, Brooklyn, something had been organised called a Tweet Party.

The same was true in St Andrew, Jamaica, where a party was scheduled forUsain Bolt’s Tracks and Records on Constant Spring Road.

According to a release from Kingston Live Entertainment, the tweet party was to “mobilise support for pop reggae sensation and top-6 finalist, Tessanne Chin”.

At press time yesterday, hundreds were still expected to take part in the #TessTop4 event.

The release regarding the New York event encouraged everybody who could, to get down to the Jamaica Breeze’s 232-02 Merrick Boulevard address, but if that was an impossibility, then persons were asked to “tweet, tweet, tweet!”

It is not yet known how much of an impact the parties have had, however, later tonight will provide the litmus test.

For the original report go to http://jamaica-gleaner.com/gleaner/20131203/ent/ent1.html