Once banned from Jamaica, CLARKS ORIGINALS launched a new collection and accompanying video campaign Clarks in Jamaica. Clarks employed the voices and talents of reggae and sport stars to explain what the Clarks Original brand means to Jamaica. 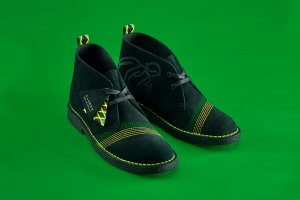 The limited edition releases are now sold out and Clarks captions on their website that they are proud to be part of island life for over 60 years. Indeed, Jamaicans always loved things made in England; appliances, black suits, ties and shoes. They are viewed as symbols of quality at various levels of society. According to Al Newman, author of the 2012 book Clarks in Jamaica, in the 1960s police would raid dancehalls and ask all the Clarks wearers to get on one side and the non Clarks wearers to go on the other side as a way of identifying the rude boys of Kingston. The shoes were noted to cost more than the average and at the time, police profiled people as outlaws if they could afford to wear a Photo Credit HighXTar

Clarks is one of the few brands worldwide that transcends generations and ethnicity. The company started in Street, Summerset UK, in 1825 by brothers Cyrus Clark and James Clark has been experiencing massive losses due to changes in the British consumer habits according to a 2018 statement. Since then they set out on a 5 year transformation to make up for the loss of sales in the UK and Ireland markets. 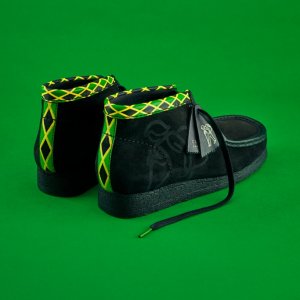 Their latest marketing effort in that transformation is Clarks In Jamaica. The video campaign takes consumers through the experience Jamaicans have with the Clarks brand as told by the artists No-Maddz, Sevanna, Koffee, Protoje, Lila Ike, M1llionz and sports star Raheem Sterling.

“Why is Clarks so engraved in Jamaican culture”? Asked Sheldon Shepherd, star of the movie Yardie and half of the group No-Maddz. This is the No-Maddz second European shoe company endorsement. The group signed an endorsement deal in 2011for Puma’s FAAS series of running shoes with Usain Bolt. It became the highest sales for a second quarter in the company’s history according to a release from Puma. The ads which sampled songs from the group to promote the “the world’s fastest band” (“Rocker, Flex And Groove”) were aired on US cable television and were played in every Footlocker and Puma store worldwide.

The original Koffee says to her, “Clarks literally means culture” as she explains how her humble beginnings gave her a sense of freedom compared to the feeling of a Clarks shoe on her feet.

In the 1970s, Jamaica’s Prime Minister, Michael Manley banned all imported shoes, Clarks included but one would not know this as Clarks found its way to every Jamaican on a journey. Reggae Singer Protoje said as a youth he thought that Clarks was a Jamaican thing and it was a status symbol driven by music. Jamaica’s culture is inextricably linked to the Clarks brand because the music of Jamaica and the Clarks in Jamaica share a story of struggle and triumph.

The Original Clarks brand has been captured in over 200 songs by dancehall and reggae artists dating back to the 1970s among them Trinity, Super Cat, Jahvillani, No-maddz, and Ika Mouse but none more popular than the 2010 trilogy by Vybz Kartel “Clarks”, “Clarks Again” featuring Popcaan and Gaza Slim and Clarks 3. 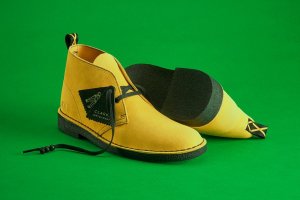 The Guardian headlined in 2010 “Vybz Kartel puts Clarks footprint on Jamaica: Clarks are back in Fashion, thanks to dancehall artist Vybz Kartel”. It then stated that “Clarks Originals have long been a staple of Jamaican fashion, but Kartel lifted them to another level”.

Clarks didn’t see it fit to engage the culture meaningfully at that time although UK and Jamaican sales of the shoes skyrocketed that year and several years after due to the songs done by Vybz Kartel.

BBC 1Xtra’s DJ Robbo Ranx said in the Guardian newspaper that, “I’v gotten a few emails and texts where a young lady has said to me, ‘Robbo it’s because of your show with this song that we’re working overtime at Clarks”. A clear indicator that dancehall music and the Jamaican culture bring economic value to the brand.

With this latest video campaign by Clarks, it seems as though they have risen above the anticlimax of that missed opportunity to finally make investments in the culture and turn the cultural capital of Jamaica into financial capital for their brand. Through a statement on their website Clarks said “Since they first hit the streets of Kingston, our profiles have occupied a special place in Jamaican culture. To celebrate this truly original concept, we’ve crafted a limited edition new collection”.

Sheldon of No-Maddz said “as boys we all wanted Clarks and every boy in Jamaica wanted a Clarks”. This continues to be true and still the Clarks Originals does not have a point of sale or flagship store in the island. Their “key strategic focus” they say has been in Asia where they have hundreds of stores since 2015. Clarks operates as a retail, wholesale, franchise and online channel with physical stores in over 130 markets worldwide. They have 600 stores in China and hundreds across India, Singapore, Malaysia and Indonesia.

Like Jamaicans, Asians see the UK headquartered Clarks Original brand as a symbol of quality and what Asia lacks in cultural capital they make up in the number of sales. Asia also has the advantage of being the maker of the shoes as much of the manufacturing of the Clarks Original shoes is done in China, India, Brazil and Vietnam. The company stated on their website that, “Most of the production takes place in Asia, with a small percentage of production in Europe and Central America. In most of these factories the facilities are shared with production for other brands and customers”.

Singer Sevanna said she saw people from different age groups wanting a Clarks while growing up, while Lila Ike said Clarks made her feel like a goddess. She said “when a woman wears it, she is seen as hardcore”. Lila also shared how her Grandfather had a brother who sent him Clarks. A popular sentimental request among Jamaican and Caribbean people because in order guarantee you to get the original Clarks, even to this day it has to be imported by trusted family members.

Still, it is indeed a wonderful redemption for Clarks, a multibillion dollar company to use the Jamaican talent and culture to sell the UK originated shoes worldwide.