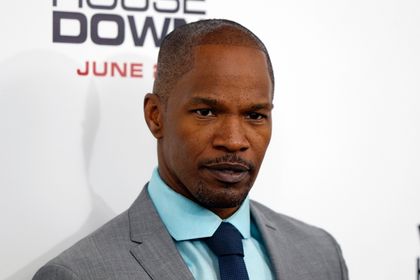 Jamie Foxx is attempting to hook up a supergroup to end all supergroups for a new track on ‘The Amazing Spider-Man 2’ soundtrack.

The Oscar winner and chart-topper, who plays villain Electro in the new Spider-Man movie, has created a new track, called Chasing Spiders, and he wants to get in the studio with Rihanna, Slash and Travis Barker to record it.

He tells Men’s Fitness magazine, “Rihanna will sing the hook, Slash will play the guitar and Travis Barker will play the drums. Fingers crossed.”

Foxx also has the video worked out – it will feature a 60-piece orchestra of comic book supervillains and superheroes.

He adds, “When it (music) really ramps up, when the orchestra comes in, that’s when you see the big fight. Imagine the orchestra playing and then, in slow motion, breaking their instruments and running from everything.”

For the original report go to http://www.torontosun.com/2013/10/21/jamie-foxx-wants-to-create-supergroup-track-for-amazing-spider-man-2